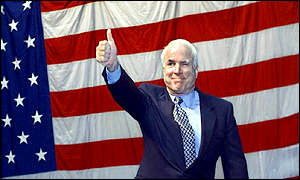 How McCain Can Win the White House
Earl Ofari Hutchinson
In a talk with reporters in Louisiana, Republican presidential contender John McCain implored disgruntled Hillary Democrats to back him. His pitch was I’m the toughest, most knowledgeable and most experienced on national security. The unmistakable inference is that rival Obama is too green, fresh, and untested to gamble with on national security. McCain’s aim was to lop off disgruntled Hillary Democrats. But it also staked out what he must do to win the White House.
The terrorism issue is still a McCain election trump card. Many Americans think there could be a terrorist attack on American soil at some point in the future. Those who think that are susceptible to McCain's pitch that he can best defend the nation's security and with America under mortal danger from a terror attack, that it's risky to change to the Democrats.
This isn’t enough. McCain must duck the economic mess Bush made by pushing his economic plan that calls for lowering the corporate income tax rate, more tax breaks for business, and making Bush’s tax cuts permanent. Though it looks a lot like Bush’s plan, McCain can spin it his way with the standard GOP line that his plan is pro-growth, in contrast to the shop worn tax and spend Democrat’s approach to growth. This still has tremendous reverb with wide segments of American voters.
He can claim that his plan will save homes from foreclosure, spark business growth, and create more jobs. He can remind voters that Reagan economic policies sparked the economic boom of the 1980s and his updated version of supply side economic policies is a mirror reflection of Reagan’s. This gives him the hook he needs to boast that Americans will reap rewards with his economic policies
McCain must openly and subtly stoke middle and working class workers’ disdain for liberal solutions to problems. Only a minority of American voters call themselves liberal. The Republican's repeated smear of the Democrats as tax and spend, liberal big government proponents still strikes a chord with millions of voters.
McCain must contest the Latino vote. His name has been mentioned countless times in the Spanish-language press and most of the time the mention was favorable. Many Latinos look benignly on him because he broke with the GOP’s hardliner stance and backed immigration reform along with Senate Democrats.
McCain doesn’t have to top or even match Bush’s total with Latinos to push the Democrats. All he needs to do is get a quarter of the Latino vote in the key Western swing states of Nevada, Colorado and New Mexico, and that might be more than enough to move the states to the GOP camp—again. Even before Bush’s massive court of Latino voters in 2004, they gave Republicans a quarter of their vote and in some places such as Florida did far better
McCain must stress that the Iraq war is not a totally losing proposition for Americans. A significant percentage still think a change in strategy, tactics, and direction in the war can if not bring victory at least bring a satisfactory peace. McCain will have a parade of generals, defense experts, and the defense industry to help him sell that position to millions of voters.

McCain needs a fractured Democratic Party. Exit polls in the bruising Clinton and Obama Democratic primary battles showed that the bruises are firmly tattooed on some fervent Clinton backers. Nearly a quarter, mostly blue collar, rural, and non-college educated whites, said they would vote for McCain or stay home if the nominee were Obama. And since he is the nominee, if many mean what they say, McCain is the big winner with them.
The historic nomination of an African-American as the Democratic presidential standard bearer is applauded by many publicly but privately it raises doubts even dread among many others. McCain can’t and won’t stoke those racial fears. He doesn’t have to they’re already there and that’s a campaign plus for him.
Then there’s the issue of how many voters turnout for the Democrats and the GOP. Much is made that the Democrats scored near record turnouts in the number of voters and registration in their primaries in the winter of 2008 and that Republicans lagged way behind. Yet, in fairly recent presidential election history there was lower turnout and seemingly less enthusiasm in the Republican primaries in the election battles of Bush Sr. and Reagan. Both were still elected.
The variables that work for McCain against Obama are the war on terror, a victory spin on Iraq, the experience factor, the voter’s inherent fear of an untested candidate, the strong tradition in millions of households of voting for GOP candidates especially among male voters, a bickering, divided Democratic Party, and the X factor of race.
McCain can and will exploit these variables on the campaign trail. He can win the White House with them.

Earl Ofari Hutchinson is an author and political analyst. His new book is The Ethnic Presidency: How Race Decides the Race to the White House (Middle Passage Press, February 2008).
Posted by The Hutchinson Political Report at 7:55 AM 2 comments: