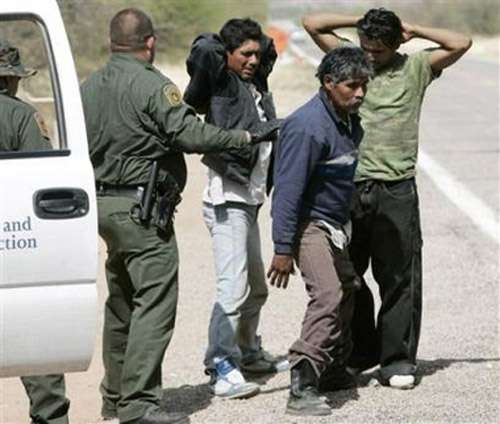 President Obama wasted no time in denouncing Arizona’s hard-nosed anti-immigration law. He called it misguided, irresponsible and a threat to civil liberties. Obama’s right. The bill is wasteful, unenforceable, and more ominously virtually a license for police to engage in racial profiling. But it’s also popular in Arizona and judging from polls and underground sentiment of millions of Americans on immigration, popular with them too.

Arizona official’s claim they had to act in large part because the federal government has dithered, stalled, and back pedaled countless times on enacting comprehensive immigration reform. This in effect dumps the immigration reform issue squarely back in Obama’s lap. In the coming days immigration reform leaders, Hispanic activist groups, and the Congressional Hispanic Caucus almost certainly will ratchet up their demand and efforts to get Obama to get the ball rolling on a reform bill in Congress. The demand couldn’t come at a worse time for Obama.
The loss of thousands of jobs, with official unemployment still nudging double digit, African-American joblessness far higher, and with low wage American workers bearing the brunt of the downturn presents a wedge for immigration foes. They will again hammer that undocumented workers snatch jobs from needy American workers. The charge has been hotly disputed but it still touches a raw nerve.
There’s still the loose network of anti-immigration organizations, and the legions of right wing talk jocks, Tea Party activists, and Fox News Network talking heads who can stir the troops to oppose any reform. The stock attack charge that any immigration reform bill is a de facto reward for breaking the law still ignites anger and passion in many Americans. Arizona governor Jan Brewer tied her signing the bill into law into another issue that ignites even greater passion and anger. And that’s crime. She flatly said that the law would help protect her state from crime from Mexico. The governor cited no evidence to show that immigration has bumped the state’s crime rate up. But then again she didn’t have to. The frightening shots of bullet riddled, hacked up bodies that have become regular news features on American TV screens from the low intensity warfare in Mexico between government forces and the drug cartels and with each other is more than enough to stir nightmare terror in many Americans that a wave of illegal immigrants flooding the country will turn America’s streets into blood drenched streets.

Immigration reform also can’t be separated from partisan politics. The two special elections slated in May in Hawaii and Pennsylvania are toss ups and a loss of either of the seats to Republicans would further add to Democrat’s fears that the three hammer blows they suffered in losing a revered Senate seat in Massachusetts, and governorships in Virginia and New Jersey were not aberrations. With November mid-term elections fast approaching and the real danger that Democrats could lose big in them, picking a fight that’s bound to be even more contentious and divisive than the health care battle is just too great a risk.
Obama has a major fight on his hands to get a financial reform bill passed. There’s the risk that the concessions he and Senate Democrats made to Republicans to quickly get the bill passed could alienate many liberal and progressive Democrats who want to see the toughest possible consumer protections in place against the ravages of big banks and financial houses. They were the driving force behind his election win and the White House banks on them their numbers and passion to help blunt the momentum of Tea Party activists in the fall, and beyond.

Obama gave immigration reform short shrift in his State of the Union back in February, and this rankled immigration reform backers. They loudly protested that the president reneged on his promise to them to make comprehensive emigration reform a centerpiece of his agenda. In the months since then they have hammered at Obama to make good on the promise with the vague hint that if he doesn’t, more than a few Latino voters may just be tempted to stay home in the fall and beyond.
Arizona may have taken the option of watch and wait caution off the White House table. And that puts Obama on the spot.

Earl Ofari Hutchinson is an author and political analyst. His nationally heard talk show is on KTYM-AM 1460 AM Los Angeles, Fridays 9:30 AM and KPFK Pacifica Radio 90.7 Los Angeles, Saturdays Noon PST.
Posted by The Hutchinson Political Report at 6:32 PM 8 comments: