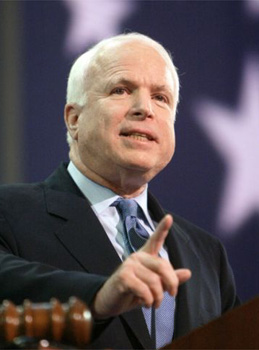 Republican presidential contender John McCain learned a lesson from G. W. Bush. That is from GOP presidential candidate Bush, not president Bush. In 2000, Bush braved the political chill and addressed the NAACP’s annual confab. There was absolutely no possibility that Bush would get anything more than a polite listen from the convention goers. They were nearly all generic Democrats, and would give Democratic presidential rival Al Gore the ritual ninety percent of the black vote. But Bush wasn’t trying to win friends at the convention he was trying not to make enemies. The last thing that he wanted was for blacks to see him as a white Southern, fundamentalist bible thumping, anti civil rights hard line conservative, but rather a racial moderate, and a compassionate conservative. If blacks saw him as a hard liner, it would virtually guarantee that they would treat the presidential campaign not as a campaign but a crusade and stampede the polls in big numbers to vote against him.
McCain’s foray to the NAACP is designed to do pretty much the same thing. He, of course, has got a far tougher act to follow with his Democratic rival Barack Obama than Bush had with rival Gore. The passion, even sheer thrill that blacks feel at the chance to back the first black presidential candidate with a legitimate shot at winning the White House is off the charts. Black voters have flooded the polls in near record numbers in some states to back Obama. Many were unabashed in saying in exit polls that race was the big reason they turned out. That feeling was very much in evidence when Obama preceded McCain to speak at the convention. Many gushed that Obama embodied what the NAACP’s near century struggle for racial parity was all about. That is to make it possible for an African-American to attain the top elected spot in the land.
But McCain’s point in appearing at the convention was still the same and that was not to antagonize blacks, and maybe, if he was lucky his and the GOP’s pet minority vote issues, school choice, business supports, faith based programs, increased HIV/AIDS funding might have resonance with some independent and conservative leaning black voters.
Still it seems a steep uphill for McCain to get even minimal traction among black voters. A May 30 Gallup Poll found that McCain’s unfavorable rating among blacks has leaped more than 25 percentage points since last June. But poll numbers in and of themselves don’t tell the whole story about how elections are won or lost.
The more important thing is whether a GOP candidate can get a small percentage of the black vote in the must win battleground states of Pennsylvania, Ohio and Florida. In his two general election victories, Bush didn’t need to get a major bump up in black support to win, he just needed a marginal increase in the key swing states. He got the few percentage points he needed in those states and that made a difference in his wins.
McCain starts with something that Bush never had among black voters, and that’s a much higher favorability rating. The Gallup poll that showed McCain‘s unfavorable rating jump also showed a slight uptick in his favorability rating among blacks. It isn’t much, but it’s just enough for McCain to bet that by spending some time and resources in courting the black vote he could do what appears to be the impossible and actually win a small but significant percentage of their vote in some key states to make a difference.
McCain made that bet last September. He was the only major GOP candidate to agree to participate in a GOP presidential candidate’s debate on race and urban issues. He ultimately backed out but only after the other major candidates also declined to appear. Since then, McCain braved boos of the crowd at the fortieth anniversary of the assassination of Martin Luther King, Jr. commemoration in Memphis in April, and even managed to turn the boos into applause when he did a public mea culpa for opposing a state holiday for King in Arizona. He then traveled to Selma to speak at the Edmund Pettis Bridge where civil rights marchers were mauled by police in 1965 to commemorate the Voting Rights.

The black vote in every election since Lyndon Johnson’s landslide victory over Goldwater in 1964 has not been in play for any GOP presidential candidate. That’s because with the arguable exception of Bush in 2004 they haven’t done anything to get it. McCain says this time he will. He won’t shake their massive support for Obama, but he doesn’t have to. He just needs a few more black votes in the right places to make the difference. The NAACP convention was one of those places.

Earl Ofari Hutchinson is an author and political analyst. His new book is The Ethnic Presidency: How Race Decides the Race to the White House (Middle Passage Press, February 2008).
Posted by The Hutchinson Political Report at 3:28 PM 3 comments: