Jefferson Defeat Not About Race 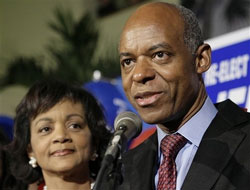 The much deserved defeat of scandal plagued Louisiana Congressman William Jefferson by Vietnamese-American immigration attorney Anh “Joseph” Cao was not about race. Whites did flock to the polls in bigger numbers than usual and the black voter turnout was much less than in the primary. But despite the ramp up in white votes, blacks still make up the majority of voters in Jefferson’s district. While many blacks voted for him out of old loyalty, a significant number didn’t. The lower voter black turnout in essence was a vote against him.
His defeat then was about ethics, interest and just plain common sense. Jefferson was not just an embarrassment. He was hopelessly damaged political goods and by plopping him back into office for a tenth term his black constituents would have been the losers.
If ever there was a case that screamed for scrubbing race from politics it was the Jefferson case. He has been on the legal hot seat for many months. He was indicted, and faces trial on bribery and corruption charges. He was stripped of his seniority on a key House committee. He left a bitter taste in the mouths of many New Orleans residents during the Katrina debacle, when he allegedly commandeered a National Guard truck to check on his personal property and save personal belongings at the same moment nearby residents needed rescue from possible drowning.
Jefferson mercifully has not screamed race at any point during his legal ordeal, and other than pro forma references to Obama on his campaign website, he did not seek and likely would not have gotten Obama’s direct help in the campaign anyway. Jefferson, however, did subtly play the race card by hinting that he was a political victim. It was a pitch for voter sympathy and of course, voter support. It also implied that he and indeed other African-American politicians should not be held to the same standard of accountability as white officials who get caught with their hand in the till. When they are jailed and pay hefty fines for violating campaign finance and ethics laws, they argue, nobody says that they have to be a cross between Mother Teresa and Saint Paul.
But Jefferson and other black elected officials should be held to a higher standard. Their mostly black constituents view them not as politicians, but as leaders and advocates. They look to them to represent their interests and to confront institutional power. Any legal smear on them makes it much harder for blacks to retain confidence in them. This diminishes their political power and influence, creating distrust and dissension among black voters. This makes it that much more difficult for blacks to generate any enthusiasm to get out to vote, or get involved in community improvement actions. That was clearly the case in Jefferson’s defeat.
It's not just scandal that hurts black officials -- the race card hurts them too. In far too many cases blacks accused of wrongdoing instinctually deflect, dodge, and muddy the charges and accusations against them by claiming racial persecution. They promptly wrap themselves in the martyr's cloak of persecuted civil rights fighters.
This is not a small point. In the past when black politicians have been accused and tried on corruption charges, they have used the race card to deflect attention from their crimes.
During the 1990s, former Illinois Congressman Mel Reynolds screamed racism when he was indicted, tried and convicted of sexual assault charges. Washington D.C. Mayor Marion Barry screamed racism when he was indicted, tried and convicted on a drug charge. California Congressman Walter Tucker, convicted of bribery charges, loudly shouted racism. In a statement black Birmingham Mayor Larry Langford issued after his recent arrest on federal corruption charges, he strongly implied that he was a victim of political persecution
Langford and the others play the odds and remind blacks that President Reagan's Justice Department initiated dozens of corruption probes against black elected officials during the 1980s. Given the Reagan administration's perceived indifference to civil rights and social programs, it was easy for many blacks to believe that some of these cases crossed the thin line between legitimate concern with bagging lawbreakers and racially-motivated political harassment of black leadership.
Black officials, such as Jefferson, will continue to be keenly watched by state and federal prosecutors for any hint of impropriety. If they engage in any forbidden activities with money, they will swiftly be called on the legal carpet. The burden of proof, then, is on them to prove that they can and will do any and everything to avoid even the slightest taint of scandal. That may be unfair, but that's the price that they must pay to be regarded as credible and honorable black leaders and advocates.
When the charges against him were first made public, a defiant Jefferson vowed that he would never resign from his seat. He banked that black voters would do what they did for nine previous terms; and that’s ignore the tarnish on his star and reelect him. Thankfully, he was wrong.

Earl Ofari Hutchinson is an author and political analyst. His forthcoming book is How Obama Won (Middle Passage Press January 2009)
Posted by The Hutchinson Political Report at 9:51 AM 2 comments: