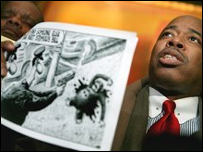 The day the New York Post sleazed its op-ed section with the vile, vicious, and veiled urge to violence cartoon against President Barack Obama this writer demanded that Post boss Rupert Murdoch issue this statement.
“The News Corporation pledges that the Post’s offensive cartoon will not be circulated, or reprinted, or syndicated. Further, we have zero tolerance toward racially insensitive and inflammatory cartoons or editorial depictions of African-Americans and other ethnic groups. Finally, we apologize for the Obama cartoon and pledge in the future that the Post and other Murdoch entities will hold to the highest standard of editorial sensitivity in our cartoons.”
Though it took a firestorm week of massive demonstrations, threats of a boycott, and an FCC license challenge (the Murdoch owned Fox Network), and a Mt. Everest sized stack of emails, letters, and faxes demanding the firing of Post management, Murdoch pretty much issued a statement that came close to what this writer demanded.
But that by no means closes the book on the sorry Post-Murdoch-Fox saga. It can, and probably will happen again. Start with Murdoch’s apology. There were three escape clauses buried in it. One is the self-serving, lame Post defense that the cartoon was just fun and games spoofery of Obama’s stimulus plan. The other is a rehash of the other Post editor’s fall back line that the cartoon was not meant to be racist. Murdoch’s final give the paper a pass defense was his declaration that the cartoon was “interpreted” as racist by “others.”
That’s not a whole heck of a lot better than the non-apology, apology Post editors issued a day after their public shellacking.


But even if Murdoch had made a sincere bare-the-chest heartfelt apology it wouldn’t amount to much. That’s the standard ploy that shock jocks, GOP big wigs, and assorted public personalities employ when they get caught with their racial pants down.
On a few occasions the offenders have been reprimanded, suspended, and even dumped. That won’t happen with the Post editors, or the offending cartoonist, and Murdoch gave absolutely no hint that anyone would be disciplined for the racial slander. There are two reasons why. They tell much about why the Post, Murdoch’s media empire, and shock jocks can get away with demeaning gays, blacks, Latinos Asians, Muslims, and women and skip away with a caressing hand slap.
One is that these guys ramp up ratings and that make media syndicates such as Fox and the Post’s cash registers jingle.


The other reason is that it’s virtually impossible to effectively muzzle cartoonists such as Sean Delonas and others that draw or talk race trash is the sphinx like silence of top politicians, broadcast industry leaders, and corporate sponsors.
Sharpton, Spike Lee, and a handful of local New York politicians led the charge against the Post, but that’s pretty much where it ended. The problem of the silence or perfunctory belated criticism by higher ups to racial taunts surfaced a few years ago following then Senate Majority leader designate Trent Lott’s veiled tout of segregation. It touched off a furor, and ultimately Lott stepped down from the post, but it took nearly a week for Bush to make a stumbling, and weak sounding disavowal of him. The silence from top politicians and industry leaders to public racism was even more deafening a few of years ago when former Reagan Secretary of Education William Bennett made his weird taunt that aborting black babies could reduce crime. Even as calls were made from the usual circles almost always blacks and liberal Democrats for an apology, or his firing from his syndicated national radio show, neither Bush or any other top GOP leader said a mumbling word about Bennett.

There’s another reason for their silence. The last two decades many Americans have become much too comfortable using code language to bash and denigrate blacks. In the 1970s, the vocabulary of covert racially loaded terms included terms such as "law and order," “crime in the streets," "permissive society," "welfare cheats," "subculture of violence," "subculture of poverty," "culturally deprived" and "lack of family values" seeped into the American lexicon about blacks. Some politicians seeking to exploit white racial fears routinely tossed about these terms.
In the 1980s new terms such as "crime prone," "war zone," "gang infested," "crack plagued," "drug turfs," "drug zombies," "violence scarred," "ghetto outcasts" and "ghetto poverty syndrome” were shoved into public discourse. These were covert racial code terms for blacks and they further reinforced the negative image of young black males as dope dealers, drive by shooters, and educational cripples. And the image of young black women as a dysfunctional collection of B’s and “hos,” welfare queens, and baby makers.
Obama is hardly exempt from this irresponsible race tinged character assault. The non-stop whisper and slander campaign against President Obama by packs of bloggers, talk jocks, and even a senator on the legitimacy of his US citizenship is a case in point.
The loud demands will continue that Murdoch back up his kind of sort of apology with real action. But he won’t. There’s simply too much money in racial trash talk (and cartooning), and too much silence from the higher ups that send a tacit signal condoning it. That silence is Murdoch’s ultimate trump card.

Earl Ofari Hutchinson is an author and political analyst. His new book is How Obama Won (Middle Passage Press, January 2009).
Posted by The Hutchinson Political Report at 9:33 PM 6 comments: