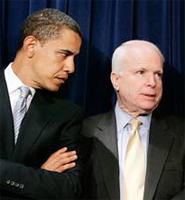 Republican presidential contender John McCain got one thing right about Democratic rival Barack Obama. He told Larry King that he didn’t think race would be much of an issue in the final vote. As McCain put it only “a tiny, tiny, minority” will vote against Obama because he’s black. McCain was not just campaign bloviating to puff up his oft touted credential as a play it straight on race guy. The notion that because millions of whites passionately back Obama race is permanently off America’s table is more hope and prayer than reality.

Still despite endless and obsessive speculation that race could derail Obama in his slog to the White House it won’t and it probably never would have. Start with McCain and Obama; McCain made the personal and pragmatic choice not to make race an issue either directly or indirectly through code words, snide hints, and racial guilt by association attacks. When the Jeremiah Wright flap cropped up, he could have hammered Obama as a stealth race baiter. He turned thumbs down on that. Later when VP mate Sarah Palin and some others in his campaign were etching to unload on Obama-Wright again, he still said no.

That decision was not totally due to honor and noble intent. A too frontal racial attack would have brought instant screams of foul from Democrats, and millions of voters who demanded that the campaign be a clean, issues focused campaign. McCain read the political leaves correctly and saw the political peril in flipping the race card. The occasions that he slipped and rapped Obama as a socialist and a terrorist fellow traveler brought universal condemnation that he was going negative or worse running a dirty campaign.
Obama helped things even more. The firm message in his signature slogan of hope and change, campaign literature, TV ads, rallies, in pitches to contributors, his core of advisors, and major endorsers was that the Obama presidential campaign and an Obama presidency would be broad, non-racial and issues driven. Anything else would have instantly stirred horrifying visions to many of Al Sharpton and Jesse Jackson. His candidacy would have been DOA.

But McCain and Obama’s best efforts to make race a non issue in the campaign would have fallen short without the sea change shift in public attitudes. The decade since the Rodney King beating, the O.J. Simpson trial, and the urban riots, has been a period of relative racial peace in America. During that time polls consistently showed that more whites than ever are genuinely convinced that America is a color-blind society, equal opportunity is a reality, and blacks and whites if not exactly attaining complete social and economic equality, are closer than ever to that goal. Though the figures on income, education and health care still show a colossal gap between poor blacks and whites, the perception nonetheless is that racism is an ugly and nasty byproduct of a long by-gone past.

The passage by huge margins of anti-affirmative action measures in California, Michigan, and Washington, was not simply a case of whites engaging in racial denial or a cover for hidden bias. Many white voters backed the initiatives because they honestly believed that color should never be in the equation in hiring and education, and that race is divisive.
It’s is easy to see why they believe that. "Whites only" signs and redneck Southern cops unleashing police dogs, turning fire hoses on and beating hapless black demonstrators have long been forgotten. Americans turn on their TVs and see legions of black newscasters and talk show hosts, topped by TV's richest and most popular celebrity, Oprah Winfrey.

They see mega-rich black entertainers and athletes pampered and fawned over by a doting media and an adoring public. They see TV commercials that picture blacks living in trendy integrated suburban homes, sending their kids to integrated schools and driving expensive cars. They see blacks such as former Secretary of State Colin Powell and his successor Condoleezza Rice in high-profile policy-making positions in the Bush administration. They see dozens of blacks in Congress, many more in state legislatures and city halls. They see blacks heading corporations and universities. And those blacks who incessantly scream racism about their plight are roundly reviled for feeding racial paranoia.
There is even some talk that the so-called Bradley Effect, the penchant for whites to lie to pollsters about their true racial feelings and vote against a black candidate, may actually turn into a reverse Bradley Effect this election. That’s that many whites will vote for Obama because he’s black. That notion is just as dubious as the Bradley Effect. But to even raise the possibility tells much about changing times and attitudes.

If Obama wins and that seems likely, race will be, as McCain says, only a tiny, tiny factor. That’s a tribute to him, Obama and the millions of America voters that were determined to make sure that race did not hurt Obama on November 4th

Earl Ofari Hutchinson is an author and political analyst. His latest book is The Ethnic Presidency: How Race Decides the Race to the White House (Middle Passage Press, February 2008).
Posted by The Hutchinson Political Report at 5:50 PM 3 comments: