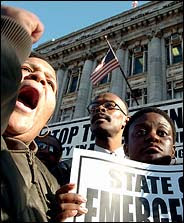 
When Newark Mayor Cory Booker learned that the alleged shooters in the execution killing of three black college students were illegal immigrants, he did the responsible thing. He did not finger point a porous border and lax law enforcement for allegedly letting so many supposed violent prone illegal immigrants slip into the country as the cause of the killings. Booker may have said and did the right thing as a responsible public official, and in this case a black elected official, who did not want to arouse public passions any more than they already were over the murders. He certainly did not want to inflame the always fragile tensions between blacks and Latinos any more than they already are.
But others have not exercised the same restraint. Some black talk show hosts and black writers have burned up Internet sites and sent of floods of emails ( this writer got several) with outlandish and reckless charges that the killings were part of a concerted plot by Latino gangs to target African-Americans for murder and mayhem. Leading immigration reform foes from the Center for Immigration Studies to Bill O’Reilly also claimed that state and federal officials are so cowered by the thought of being branded racist that they have turned a blind eye to waves of illegal immigrants who supposedly have unleashed a violent crime wave across the country. They gleefully added that Newark is a sanctuary city where police are forbidden to ask questions about a suspect’s citizenship status. With the arguable exception of the spate of violent clashes between black and Latino inmates in California’s prisons, and Los Angeles county jails last year, and the headline-grabbing murders of black teen Cheryl Green last December and three other young blacks in Los Angeles, there is no evidence that Latino gang members have embarked on a systematic campaign of ethnic cleaning against blacks.
The second claim about illegal immigrants uncorking a violent crime wave is easier to sell. The movie industry and TV series such as The Untouchables, The Godfather, Scarface, Miami Vice, and The Sopranos has long fed the popular image of violent prone immigrant reeking havoc in cities. Then there are the endless tales of crime cartels like the mafia, Cuban marielitos, Colombian cocaine cartels, Japanese yakuza and Chinese triads that also spread terror. The rumors were rife that the alleged shooters in Newark were connected with the Salvadoran Mara Salvatrucha (MS-13). This gang has gotten a lot of press ink lately as a virtual immigrant’s drug and murder incorporated.
There is however no truth to the claim that illegal immigrants have unleashed a crime wave in the country. There are more immigrants than ever in the U.S. and crime rates in the country have plummeted. The plunge has been most notable in the big cities with the largest illegal immigrant populations. FBI figures show big drops in property crimes and violent crimes, particularly the homicide rates, during the past decade. The sole exception to this has been a spike up in black on black homicides. Few of the killers here are illegal immigrants.Illegal immigrants whether juvenile or adult are far less likely to be incarcerated than native born Americans. That includes native born Latinos.

But facts never got in the way of a good politically driven scare tactic to turn public opinion against any sort of meaningful immigration reform.
It’s heartbreaking to see the falsehood about an illegal immigrant crime wave masquerade as fact in the Newark slayings. Apart from the incidents of Latino on black violence cited earlier, and the Newark murders, black and Latino relations have not been marred by violence. Most of the violence in urban areas, and that includes Newark, have been black on black or Latino on Latino.
There is no evidence that the Newark killings were anything other than a random robbery attempt gone bad. Yet, the not so subtle inference that the killings are part of an ethnic sanitizing plan against blacks comes at a time when more blacks continue to voice fears that illegal immigrants are muscling them out of jobs, and competing for scare resources in health, public services and public schools. With 1930’s depression era levels of unemployment among young black males, and with blacks making up more than nearly half of America’s record 2 million plus jail population, this is a concern that can’t be ignored. The Newark slayings fuel fears among many blacks that they are losing ground to illegal immigrants and are under siege from violent street gangs such as the Mexican Mafia and MS-13. The relatives of the three students gunned down in Newark demanded to know how one of the suspected shooters was back on a Newark street even though he had two prior felony arrests. This is a legitimate question. They’re owed an answer.
But the victim’s relatives and Booker did the right thing by not blaming their deaths on bad illegal immigration policies, or worse feeding the myth that illegal immigrants are America’s new gangsters. The pity is that others haven’t done the same.

Earl Ofari Hutchinson is an author and political analyst. His new book The Latino Challenge to Black America: Towards a Conversation between African-Americans and Hispanics (Middle Passage Press and Hispanic Economics New York) in English and Spanish will be out in October.

Posted by The Hutchinson Political Report at 2:48 PM 6 comments: