Palin’s Play of the Obama as Hitler Card Was Inevitable 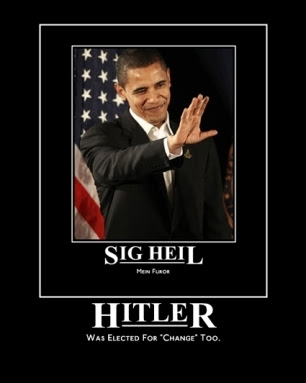 The only surprise when Sarah Palin tweeted out her message to followers likening President Obama to Hitler was that it took so long for her to make the comparison. Her tea party pals, and a rogues list of GOP and rightwing hacks, bigots, loudmouths, and spin artists took giddy delight in making the Obama to Hitler comparison even before he put a foot in the Oval Office. Fox News’s Tom Sullivan was the first in the door with the Obama as Hitler lunacy in February 2008 when he played a side by side recording of Hitler and Obama’s speeches.

Clear Channel’s Bill Cunningham, foul mouth gab queen Ann Coulter, her male counterpart, Mike Savage, Limbaugh, Cal Thomas, and, of course, Glenn Beck quickly took up the Obama as Hitler chant. With that, the Obama as Hitler line was firmly set. The only thing missing was a mob setting to do an imitation torch light parade complete with banner, signs and posters with Obama depicted as Hitler. The mob parades were tea party rallies where Obama as Hitler agitprop paraphernalia was on full display.

Now there’s Palin. In a bit of crude craft, she slyly compared Obama to Hitler by exhorting her twitter followers to read a recent column by right wing pseudo egg head writer Thomas Sowell. He pilloried Obama for arm twisting BP to set up the $20 billion escrow fund. The fund is to help repair and compensate the victims of its Gulf ruin. To Sowell Obama took another giant step toward seizing dictatorial power. There’s absolutely nothing new about this crackpot charge. It’s been an absolute smash favorite of fringe GOP congresspersons, tea party acolytes, Fox News and the menagerie of rightside talk show gabbers for two years. The Obama as Hitler idiocy is more than just the ancient and stock GOP tactic of smearing, slandering, name calling, character assassinating, and baiting liberal, and moderate Democrats. The tactic is used to prick primitive passions, and it allows the GOP to duck and dodge making a coherent case for its untenable and more often than not foolish positions on issues. No, the Hitler smear is coldly calculated, and strategically trotted out when Obama introduces a major piece of legislation, new policy initiative, or in his pre White House days, when his groundbreaking autobiography rocket launched him as a serious contender for the Democratic presidential nomination. The Hitler card is played even more furiously when it appears that Obama is near victory on legislation or an initiative.

The health care, and financial reform bills, and the BP escrow fund are textbook examples of that. Each of these initiatives had wide popular support, and GOP opposition to them appeared even more shrill, isolated, and vapid.
The Obama to Hitler card is also played opposite the Obama as Bolshevik analogy. This imprints the image of a power mad Obama out to turn government into an instrument of state control of industry and by extension to squash personal freedoms and liberties. The Hitler comparison imprints the image of a diabolical Obama out to snatch full dictatorial control of government.

Palin grabbed at Sowell’s hit piece to jump on the Hitler bandwagon. She didn’t have to explain how or why Obama’s urge of BP to set up the Gulf damage fund was Hitler like. But she didn’t have to explain the absurd. She knows that legions already have mindlessly swallowed the Hitler image of Obama. Expect more Obama as Hitler digs the next time the White House stands poised to score another victory.