Order Now!
The Ethnic Presidency: How Race Decides the Race to the White House 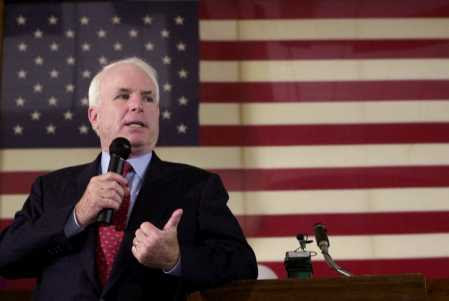 Democratic presidential contender Barack Obama coyly hinted at something that has been virtually taboo during the fierce hunt for the White House in 2008. That’s likely GOP presidential candidate John McCain’s age. In a speech at the Jefferson-Jackson dinner in Virginia in early February, Obama hailed McCain for his half-century of service to the country.
This borderline ageist damn with faint praise of McCain was of course tame stuff compared to the dumb crack from B karate movie action guy Chuck Norris before the Florida primary last January that McCain was just too old to be president. Norris subsequently apologized but he still got a swift and deserved disappearance as a prominent mouthpiece for McCain’s GOP presidential rival Arkansas Governor Mike Huckabee. It probably ramped up in the number of votes McCain got from the loads of AARP seniors that retired in the state. That sweetened McCain’s victory there and rocketed his once seemingly DOA campaign forward faster.
Norris aside, age is and will be a factor in the possible showdown between McCain and Obama. Some Democrats undoubtedly bank that Obama’s boyish looks and fresh faced vigor will stand in stark contrast to the weary, and slow pace gait of McCain. But age won’t be an Obama trump card against McCain.
It just doesn’t titillate and get the tongues furiously wagging as race does with Obama and gender with Hillary Clinton. It shouldn’t. Age is no legitimate measure of McCain’s mindset, physical health, or even his possible longevity in the office. JFK, Nixon, and Clinton were all in their forties when they took office. Each had serious health problems, and each one faced serious political and personal crises during their terms, but their health didn’t lay them low. McCain released hundreds of pages of his health records before his presidential run in 2000 and last year to head off talk that he’s medically and emotionally incompetent (that pertains to his torture as a Vietnam POW) to be president. Even if he hadn’t, and even if there were health issues with him, his age still holds minefield peril for Obama.
Reagan is the best example of that. Other than sniggers, and wisecracks about his memory lapses and occasional gaffes, there was no evidence Reagan lost a single vote because anyone thought he was too old. The early signs of Alzheimer’s came much later in his term and by then the Reagan myth and legacy had been well ensured. The eyes of many in their audiences misted over the countless times McCain and the other one time GOP presidential candidates evoked Reagan’s name during their debates and on the campaign trail.
Reagan for his part did much to defuse the age issue when he turned to his Democratic opponent Walter Mondale in their presidential debate in 1984 and challenged, "I want you to know that I will not make age an issue of this campaign. I am not going to exploit, for political purposes, my opponent's youth and inexperience." The aim was not to score a quick debate point or to cut Mondale low, it was to make the point that age is not a liability but a desired quality in a head of state; that age equates with experience, level headedness, and maturity.
Then there are the voter demographics and age related issues. The vast array of programs from social security to education and housing subsidies for seniors soaks up more than a quarter of the federal budget. Legions of senior citizen advocacy groups keep a hawk like watch on funding, spending, and possible cuts in those services. The slightest hint of any attack on social security either real or manufactured politically is the political kiss of death for a candidate. Seniors have the political muscle to make sure of that. Those aged 60 and older make up almost a quarter of those who turn out on Election Day.
There is no such thing as an old age voting bloc. Seniors vote based on their needs, personal tastes, interests, and political preferences, just like other voting groups. But seniors have been far more likely to vote for Republicans than Democrats. In 2004, those over aged 60 gave Bush a wider vote margin over John Kerry than any other age group.
McCain deftly snatched a page from Reagan’s political playbook, dampened the age issue, and will try to turn the age table on Obama. He’ll pound on the point that a school boy looking, relative political newcomer on the national scene simply can’t be trusted too make the mature, sober, and vital decisions that presidents have to make especially in times of war, terrorist peril and domestic crisis. The irony is that age may just turn out to be McCain’s trump card instead of the Democrat’s even if Obama tries to help him out of his chair when they debate.

Earl Ofari Hutchinson is an author and political analyst. His forthcoming book is The Ethnic Presidency: How Race Decides the Race to the White House (Middle Passage Press, February 2008).
Posted by The Hutchinson Political Report at 8:16 AM 4 comments: