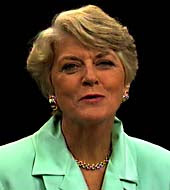 A defiant Geraldine Ferraro told ABC’s Diane Sawyer that she had “absolutely” no regrets about saying that Democratic presidential contender Barack Obama was getting kid glove treatment because he’s black. Ferraro could be defiant. The former Democratic VP candidate and Hillary Clinton advisor had just voluntarily stepped down in response to the howls from the Obama camp for Clinton to fire her for what they called her racist and insulting remarks. The Ferraro-Obama flap was just the latest in the long and rancorous, name calling, and finger pointing attacks that Clinton and Obama have leveled at each other.

But the Ferraro tiff did raise one intriguing question. And that’s, does race trump gender, or is it the other way around? That question has been perched on the lips of pundits since Obama and Clinton tossed their hats in the ring last year. In the case of Obama the question was always would whites back an African-American for president. In the case of Clinton the question was would men back a woman for president. Ferraro flatly said that the media was sexist and that it had relentlessly dumped on Clinton because she’s a she. Obama in his retort hinted that race was an obstacle and that he had worked doubly hard to cast his campaign above race, and stick to the theme of change, presumably that meant change for all.

But Ferraro no matter how crude and intemperate one thinks her racial dig at Obama was, she had a valid point about gender. And so did Obama about race.

Clinton has had to deal with a relentless barrage of gender tinged wisecracks and outright insults on the campaign trail. At one rally, hecklers yelled to her to iron their shirts. Other gender taunts and slurs were even less flattering. Radio host Rush Limbaugh told listeners in one of his nationally syndicated shows, "Will this country want to actually watch a woman get older before their eyes on a daily basis?" Clinton has been taunted in some online websites with fake ads for toilet brushes labeled, "First Cleaning Lady" and a Clinton nutcracker was also for sale. It cracked nuts between her legs. Hillary Clinton's hairdos, ankles and even her cleavage did not stir any sustained protests or outrage from either men or women.

However, Obama and his backers have constantly been on guard against any hint of a racial backlash to his candidacy. The first hint of that was in the New Hampshire primary when some polls showed Obama handily beating Clinton only to suffer a close loss. That brought whispers that Obama was a victim of the Bradley Effect. This was named after the loss in the 1982 California governor’s race by African-American Los Angeles mayor Tom Bradley to a white candidate. Bradley had a double digit polling lead over him before the election. The Bradley effect is the propensity of whites to tell pollsters that race has no importance in their vote and then show at the polls that it does. But Obama seemed to dispel the Bradley Effect by garnering substantial white support in primary victories in other states. Yet, the potential for subtle white resistance to his candidacy is something that the Obama camp privately worries about.

The politically correct view is that Clinton and Obama’s entrance into and drive for the presidency will permanently alter the hostile mindset of many men that a woman is not equipped to hold the highest office and the thought of many whites that a black man is not equipped to be president. Yet, in Democratic primaries in January and February Obama held his own or surpassed Hillary’s vote total with white men. He did it in some of the most traditional bastions of white male voter resistance to backing a black candidate in elections past. Meanwhile, Clinton got substantial white male support in her big primary win over Obama in Ohio. But the racial divide did appear with a vengeance in the Mississippi primary where Obama got the bulk of the black vote, and Clinton got the bulk of the white vote.

So whether Ferraro was totally on the mark about men and Clinton and race and Obama will continue to be debated, squabbled over, and finger pointed at by Clinton and Obama. The one thing that’s for sure is the one candidate who has a Cheshire cat wide grin on his face at the rancor between them over race and gender is named John McCain.

New America Media National Political Affairs Writer Earl Ofari Hutchinson is an author and political analyst. His forthcoming book is How the GOP Can Keep the White House, How the Democrats Can Take it Back ( Middle Passage Press, July 2008).
Posted by The Hutchinson Political Report at 8:51 AM 4 comments: