What’s Next--Muslim Only Lines at Airports? 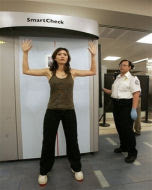 Are Muslim only lines at airports next? The thought is offensive, disgusting, and blatantly unconstitutional. But it’s hardly far-fetched. Three years before suspected Nigerian airline terrorist Umar Farouk Abdulmutallab was hauled off a Northwest airlines flight from Amsterdam to Detroit with a powder and liquid explosive device stuffed in his underwear, British Department of Transportation officials openly discussed corralling men of Asian or Middle Eastern appearance at airports for intense questioning, checks and searches. The plan outraged Muslim leaders and British officials backed off the systematic profiling of Muslims. However, single men of Asian and Middle Eastern appearance were still subject to intense checks and searches. Britain was not alone. France and the Netherlands had already imposed de facto profiling of Muslim appearing young men and families at airports since the September, 2001 terror attacks. Polls showed that a substantial majority of Europeans agreed that racial profiling was not repugnant if it made airline travel safer and thwarted a possible terror attack. The clamor for a racial crackdown was first heard in the U.S. following the bombing of the Federal Building in Oklahoma City in 1996,

Then President Clinton and Attorney General Janet Reno had the good sense not rush to judgment and scapegoat Muslims. The swift arrest of Timothy McVeigh squelched the building mob hysteria against them. But it didn't squelch public suspicions that all Muslims were potential terrorists. The federal building bombing propelled Clinton's 1996 Antiterrorism Act through Congress. Civil rights and civil liberties groups had waged a protracted battle against the bill. The law gave the FBI broad power to infiltrate groups, quash fundraising by foreigners, monitor airline travel, and seize motel and hotel records and trash due process by permitting the admission of secret evidence to expel immigrants. The implication was that present and future attacks would likely be launched by those with an Arab name and face rather than by men like McVeigh.

President Bush, as Clinton, took the high ground after the 911 attack. He did not reflexively finger-point Muslims. The Bush administration publicly assured that profiling was reprehensible and violated legal and constitutional principles, and that it would not be done. But the attack stirred tremors among Muslims that they would routinely be targeted, subject to search and surveillance, and profiled at airports.

The profiling alarm bells went off again after a soldier with a Muslim name shot up the military base at Ft. Hood back in November. The Council on American-Islamic Relations wasted no time and issued a loud and vigorous denunciation of the mass killing. The Council didn't know at that moment whether Major Nidal Malik Hasan, the alleged shooter, was a Muslim by birth, a converted Muslim, or even a Muslim at all. The name and the horrific murder spree was enough to drive the group to quickly distance itself from the rampage. Other Muslim organizations instantly followed suit and issued their own equally strong disavowal of Hasan.

This didn’t stop the pack of Fox Network commentators, conservative radio talk show hosts, writers, and some officials from again openly shouting for even tighter scrutiny of Muslim groups. Terror suspect Abdulmutallab has simply raised the decibel level on their call for transportation officials to openly profile Muslims at airports, train stations, and even on the open highways.

Some elected officials have even jumped on the profiling bandwagon. Congressman Peter King, ranking Republican on the Homeland Security Committee, predictably loudly called for the profiling of Muslims. Brooklyn Assemblyman Dov Hikind went further and announced he’d reintroduce the bill he first introduced in 2005 to let police stop and search anyone they deem to be suspicious. Hikind didn’t specifically finger Muslims, but the intent of the bill was unmistakable, namely to target Muslims.

The New York Assembly will reject Hikind’s bill again. But the rejection isn’t likely to be unanimous. Legislators read the papers and the polls. Informal on line polls taken immediately after Abdulmutallab’s failed terror attempt found that a majority of Americans are ready to turn a blind eye to law, the constitution and just plain human decency to target Muslims, any Muslim, for special scrutiny. No matter that a potential terrorist can come in any shape, size, color, gender, and disguise. The Leadership Conference on Civil Rights noted that convicted terrorists John Walker Lindh were white, and Richard Reid was Jamaican and British. Abdulmutallab is Nigerian, but from all appearances he could just as easily be mistaken for a young African-American hip hop artist.

Broad-based ethnic profiling creates in turn panic and the false sense of security that airlines are actually preventing terrorist attacks. It also causes law enforcement resources to be squandered chasing the wrong targets. Worse, it’s a witch-hunt against a group based solely on their religion and ethnicity. This fuels even greater racial division, fear and hysteria. The public whispers and the right wing’s open talk of Muslim only airport lines do the same.

Earl Ofari Hutchinson is an author and political analyst. His forthcoming book, How Obama Governed: The Year of Crisis and Challenge (Middle Passage Press) will be released in January 2010.
Posted by The Hutchinson Political Report at 1:31 PM 8 comments: