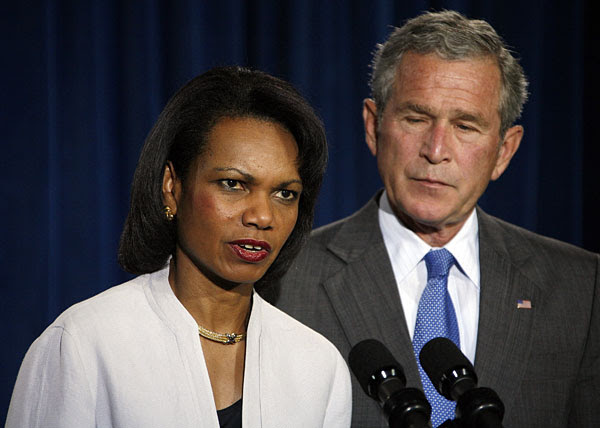 An only slightly repentant former U.S. Secretary of State Condoleezza Rice told a well-heeled, prestigious conference crowd on the Future of Asia at the Chinese University of Hong Kong last March that she had doubts and misgivings over the way things ultimately turned out in Iraq. If she had it to do all over again she’d press her boss, President Bush, to make a better effort to get the Iraqis more involved in the grunt work of actually rebuilding the war ravaged country.
Rice, of course, tactfully left out to two important omissions to the conference crowd. One it was her and the circle of hardnosed war hawks that hectored, badgered, and hammered Bush to launch the war that ravaged the country. A war that is now virtually universally regarded as a failed, flawed, wasteful, and grotesquely unnecessary war.

Rice’s second even more damning omission is that to sell the war as indispensable to the war on terrorism she and the hawks distorted, exaggerated facts and events, and flat out lied. But seven years later, with Bush safely gone from the White House, and more than a few fingers happily but wrongly pointing at the Obama administration for Bush’s Iraq misadventure, and Rice safely ensconced back at Stanford University, she can gloss over Iraq, and instead concentrate on painting a compelling and sympathetic picture of herself as a black woman who suffered the sting of racial persecution, bigotry and even the threat of violence to rise to a pivotal political figure.
At first glance, the story she tells in her memoir, “Extraordinary, Ordinary People” is extraordinary. She recounts the segregated schools, swimming pools, libraries, and housing, the voting exclusion, and the always ever pervasive threat of physical violence, that was part of the tapestry of 1950s Jim Crow, Bull Conner terrorized Birmingham, Alabama she grew up in. She talks about the strength, perseverance and determination of her parents and their constant push to instill in their sons and daughters the value of education. Education they knew was a surefire ticket out of a self-imposed America’s self-imposed racial trap for blacks.

Rice took the message to heart and her personal success story is well-known. She obtained her bachelor's degree in political science, cum laude and Phi Beta Kappa, from the University of Denver in 1974 where she enrolled at the age of 15; her master's degree from the University of Notre Dame in 1975. And she got her Ph.D. from the Graduate School of International Studies at the University of Denver in 1981. Her years as an influential and much sought after international affairs expert and planner which culminated in her pick as Bush’s first National security Advisor and then Secretary of State are just as well-known.

These are truly breakthroughs, even pioneering, glass ceiling shattering breakthroughs for a woman of color and can inspire other young women to attain the heights. In any other time, place, and especially with any other administration other than Bush’s, Rice would be hailed and lauded as the political affairs Rosa Parks. She would deservedly be held up as a worthy model of what a black woman with grit and tenacity can do to smash her way out of the suffocating racial and gender boxes.

That’s not the case with Rice, though. Mention the name Condoleezza Rice even now and the reaction among Bush bashers and most blacks is still pretty much the same as what it was when singer-activist Harry Belafonte in 2006 blasted her and Colin Powell as “house Negroes.” Belafonte’s blast drew near universal applause from blacks. It almost certainly would still get the same reaction today from most blacks.

It would be the rarest of sights to find Rice’s picture on the walls and in the showcases of inner city schools that festoon them with the faces and names of prominent black figures. The hostility to and dismissal of Rice hinges on that as part of the reviled Bush administration she was a racial traitor. It’s grossly unfair to lay that tag on her. Her accomplishments are undeniable, and they shouldn’t be cavalierly sloughed off. There’s even some evidence that she spoke up at a critical point when Bush was gung ho to scrap the affirmative action program at the University of Michigan in 2003. Rice softened the Bush position by publicly protesting that race could be used as a factor in school admissions. The court agreed.
This didn’t change the loathe of Rice by many blacks and Bush loathers then. And her admirable fight to overcome racial adversity won’t change or soften their opinion of her now. Condi’s remarkable personal triumphant over the racial odds were praiseworthy then and they still are. Unfortunately, her moving civil rights story can’t trump the role she played in Bush’s despicable Iraq folly.