Blowing off Tea Baggers as Racist Misses the Point 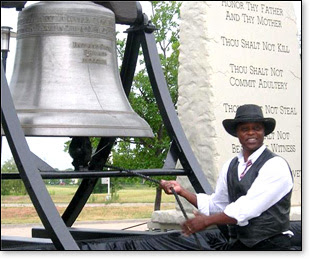 The new political article of faith is that tea baggers are blatant or closet racists. MSNBC’s Keith Olberman, Meghan McCain, and Captain Marvel Comics Captain America and his black sidekick Falcon, are the latest to poke fun at and pick a fight with the tea baggers over their alleged serial racism. Although it’s worth noting, Marvel Comics had a second thought about it and promptly apologized for the slam.

It’s true, that the very thought of a black man in the White House turns the stomachs of many tea baggers and they make no bones about that. The cameras caught a few ranting at the tea party convention, their signs, banners, Joker posters, confederate flags, Texas lone star flags, and crude borderline bigoted race baiting misspelled scrawls on signs and posters at their marches and rallies are ample evidence of that. They deserve to be mocked and dismissed as the loony, bigoted, paranoid cranks they are. The endless pack of conservative bloggers, talk show gabbers, websites, and web chat rooms that have made Obama bashing a lucrative growth industry with their endless knocks, crude racist digs, slurs, cartoon depictions have been wildly effective in working up some tea baggers into a fever pitch against Obama.

But the race rap against the tea baggers misses a big point, in fact several points that tell much about why they’ve roared on the scene seemingly from nowhere. And why they’ve caught the fancy of the public and media, triggered a nervous twitch among Democrats and send terror through the GOP mainstream.

Nearly two decades ago the GOP found that the always volatile mix of big government and economics could whip frustrated, rebellious, angry whites (and more than a few non-whites) into a tizzy far better than crude race baiting. Many blue collar white males were losing ground to minorities and women in the workplace, schools, and in society. The trend toward white male poverty and alienation became more evident in the early 1980s when nearly 10 million Americans were added to the poverty rolls; more than half were from white, male-headed families. Two decades later, the number of white men in poverty or among lower income wage earners continued to expand. The estimate was that more a significant percent of white males who voted in the 2004 and 2008 presidential elections made less than $45,000 in household income.

The finger point was at the big, intrusive federal government that tilted unfairly in spending priorities toward social programs that benefited minorities at the expense of hard working whites. This is exactly how hate groups, the anti-Obama web sites and bloggers, and talk jocks craft the reason for the anger and alienation that many white males feel toward health care and by extension Obama. This easily translates out to even more fear, rage and distrust of big government. The vintage blend of anti-government politics, calls defending personal freedom, and was the neo libertarian war cry at the Conservative Political Action Convention and the tea party convention. The neo libertarian big government cry dwarfed the subtle and overt race bait appeals that were seen and heard at both conventions.
Tea baggers rail at Obama, the Democrats, and big government, the elites, and Wall Street. Yet, the baggers also grouse about abortion, family values, gay marriage and rights, and tax cuts, and not race.

Rightwing populism with its mix of xenophobia, loath of government as too liberal, too tax and spend, and too permissive, and a killer of personal freedom and choice has been the engine that powered two Reagan and Bush White House wins. Scores of GOP governors, senators and congresspersons have twisted and massaged wedge issues to win and hold office and to maintain regional and national political dominance. The GOP grassroots brand of populism has stirred millions operating outside the confines of the GOP mainstream. In 2008 many of these voters stayed home. Even Palin wasn't enough to budge them. Their defection was more a personal and visceral reaction to the bumbles of Bush than a radical and permanent sea change in overall white voter sentiment about Obama, the Democrats, and the GOP. They were ripe for the tea party movement, or any movement that keyed their anger and frustration into action.
The supposed prima facie proof that tea party movement is loaded with unreconstructed bigots and driven by race frenzy is that tea bag leaders won’t denounce the racists in their ranks. But that stamps no racial carbon print on tea baggers either. The movement would have to be structured, layered, and regimented with a unitary agenda and program for that to be the case. The all over the map views spouted at the Nashville convention should have exploded that myth. The disparate, disjointed, and scrambled, headless amoeba like character of the tea party movement gives it wallop, and makes it even more dangerous. Blowing off the tea baggers as bunch of closet hooded rednecks misses this point, too.

Earl Ofari Hutchinson is an author and political analyst. His new book is, How Obama Governed: The Year of Crisis and Challenge (Middle Passage Press).
Posted by The Hutchinson Political Report at 12:34 PM 6 comments: