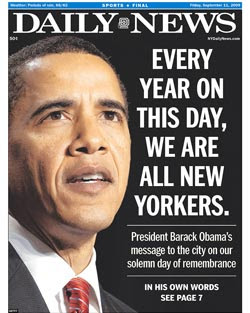 Earl Ofari Hutchinson
The Obama Hates America theme is not hyperbole. It has been relentlessly played for all it’s worth from the second that then Democratic presidential candidate Obama announced in February 2007 that he would seek the White House. It almost certainly will be played hard again in the days leading up to the ninth anniversary of the 9/11 terror attacks.
Obama’s one little step that could feed the wacky line is not telling yet where and how he’ll commemorate the day. This in itself supposedly is enough to show that the president disrespects, minimizes, or is cavalier about the hallowed day. It’s none of those things. But it’s just another in the pile of supposed anti-American sins that Obama is guilty of. The nutty knock of Obama as America hater is driven in part by ignorance, in part by politics, and in bigger part by race. The ignorance behind the attack line is easy to understand, and predictable. His name, the birth certificate flap, his frequent statement’s touting religious respect and tolerance for Muslims, and his refusal to flaunt and wave around his very private and personal expression of his Christian faith fuel the stupidity and suspicion about who and what he really is.
The politics behind the attack line is just as comprehensible. The line was set by presidential rival John McCain and run hard with by Sarah Palin VP pick during the campaign. McCain dropped veiled hints that Obama was a far out left liberal who was soft on terrorism, the Iraq war, and the Patriot act enforcement. The implication was that once in the White House he’d give away the company store to America’s sworn enemies.
Palin skipped the hints. She practically roared that Obama pals around with terrorists, left dictators, and commies. And that an Obama win would mean a leftwing takeover of the country. McCain’s hint was shrugged off, and Palin’s hit was outright mocked, ridiculed, and laughed at by much of the media. But millions didn’t laugh. They actually believed that Obama fit easily somewhere between Osama and Castro. Polls continued to show that those that said that Obama was an alien and a closet subversive hovered in the low double digit figure. In the past month, the same polls show that the number who say that about him has doubled, and they all aren’t’ Palin clones and cheerleaders. A lot of Independents and Democrats say the same thing.
Then there’s the unstated; and that’s race. There’s always been a deep feeling among many whites that African-Americans are inherent rebels against America’s institutions and values. During the late 1960’s that feeling took off. The mass civil rights demonstrations, protests, the black power surge, and the urban uprisings turned the myth of permanent black rebellion into the myth of black radicalism. This is and always has been nonsense. Yet, when facts crash hard against ingrained beliefs, and especially beliefs fueled by racial loathing, it’s no contest which will win out.
So it won’t make much difference whether Obama picks the World Trade Center site, the Pentagon, Arlington Cemetery, or the moon, to commemorate 9/11. His name, his religious tolerance, his race, and the relentless GOP smear machine have created the perfect storm to tag Obama as the president that hates America. The tweets from Palin, rightwing bloggers, and talk show gabbers snidely implying that Obama’s is that are probably already typed out and ready to go on 9/11 and beyond.