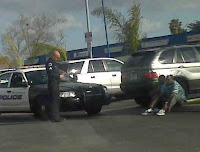 The throng of angry whites jeered, catcalled, and spat out borderline racial insults at the small group of mostly black protestors. This wasn’t a march against Jim Crow in Montgomery, Birmingham, Jackson, Mississippi, or Cicero, The year wasn’t 1963. The charged racial confrontation happened on March 14, 2010 in the self-billed All-American, mostly white Los Angeles suburban bedroom city of Torrance, California. The march was called to protest the unwarranted stop, search and harassment of Robert Taylor, a prominent Los Angeles African-American minister and civic leader by two white Torrance police officers on March 4. Following the stop, there were hundreds of outraged letters many filled with vile, crude, and profane racist pot shots at blacks, in local newspapers blasting Taylor and civil rights supporters.
The Taylor stop fit the all too familiar pattern of many unwarranted stops of black and Latino motorists. Torrance police officials claimed that he and the car he drove allegedly fit the description of a suspect and car involved in a robbery and assault a day earlier.

The problem is Taylor is not even remotely close in appearance to the description of the suspect. The picture circulated was of a short, stocky dark complexioned 30ish black male. Taylor is tall, in his 60s, and light complexioned.
Predictably, as in most racial profiling allegations, Torrance police and city officials hotly denied the profiling charge. They justified it with the stock story that crime is on the rise in the city, but offered no compelling stats to back up that claim. Taylor’s stop would have likely ignited the usual finger pointing, charge swapping, and then faded fast except for one thing. Torrance has been slapped with a Justice Department lawsuit, civil rights lawsuits, court settlements, and hundreds of verbal complaints over the years by black and Latino motorists, shoppers, African-American mail carriers some in full uniform that work at postal stations in Torrance, and residents such as Taylor who allege they were racially profiled.

Torrance is hardly unique. The past decade, Los Angeles, New York, Chicago, Miami and other big and small cities have repeatedly been called on the carpet for alleged racial profiling. In an address to a joint session of Congress in 2001, then President Bush blasted racial profiling, "It’s wrong and we will end it in America." It hasn’t

The refusal to admit that racial profiling exists by many public officials and many in law enforcement has done much to torpedo nearly every effort by local and national civil rights and civil liberties groups to get law enforcement and federal agencies not only to admit that racial profiling happens but to do something about it. The throng of white protestors that harangued the blacks and other supporters who protested the Taylor stop in Torrance was ample proof of that.

A perennial federal bill served up by House Democrat John Conyers to get federal agencies to collect stats and do reports on racial profiling hasn't gotten to first base. A similar racial profiling bill met a similar fate in California in 1999. The bill passed by the state legislature mandated that law enforcement agencies compile racial stats on traffic stops. It was promptly vetoed by then Democratic governor Gray Davis.
Despite Davis’s veto, nearly 60 California city and county police departments, the California Highway Patrol, and University of California police agencies either through mandatory federal consent decrees or voluntarily collect date on unwarranted traffic stops of motorist and contacts civilian to determine if there is a racial bent to the stops. Torrance is not one of those cities.

Nationally, 46 states collect data either voluntarily or compelled by state law on unwarranted pedestrian contacts and traffic stops. Most police officials, as in Torrance, loudly contend that good police work is about the business of catching criminals and reducing crime, not about profiling blacks and Latinos. If more black and Latino men are stopped it's not because they're black or Latino but because they commit more crimes. The other even more problematic tact used to debunk racial profiling is the few statistics that have been compiled on unwarranted stops. In this case not by police agencies but based on citizen responses. In two surveys, the Federal Bureau of Justice Statistics took a hard, long quantified look at racial profiling using information that it got from citizens. Both times, the agency found that while whites are stopped, searched and arrested far less than blacks or Latinos, there was no hard proof that the stops had anything to do with race.
This has done even more to damp down a public outcry to get police agencies and legislators to admit that racial profiling is a fact on many city streets and highways and then to take firm action to eliminate it.

The arrest last July of Harvard University Professor Henry Louis Gate's touched off a brief furor over racial profiling. Taylor’s stop and search has done the same in a bedroom Southern California city. It has again cast the ugly glare on the always troubling problem of racial profiling.