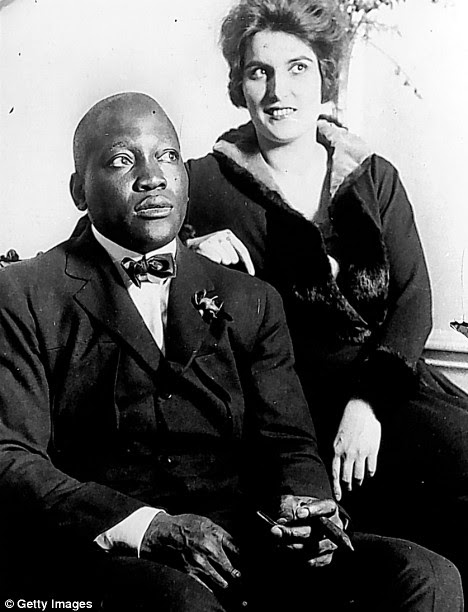 The head of USA Boxing recently announced that its centennial anniversary celebration of the famed Jack Johnson and James Jeffries fight in July, 1910 will be a national extravaganza. It will feature showings of the fight film, tours of the fight site and training camps, appearances by past heavyweight champions and live boxing. The centerpiece of the gala will be their "Jack Johnson Pardon Dinner. At the dinner, the promoters hope to announce that President Obama will grant a posthumous pardon to Johnson. At least, that’s the hope.

The Johnson-Jeffries fight is firmly etched in history as the fight that stood sport and race relations in America on its head. The brash, outspoken black champs thrashing of white contender Jeffries ignited nationwide racist panic and hysteria, and loud calls to prosecute Johnson for violating the Mann Act. The law made it illegal to transport women across state lines for immoral purposes. Many contend passing the act was a thinly veiled effort to nail Johnson for cavorting with white women. The anti-Johnson throng got their wish. In 1913, he was imprisoned for violating the Mann Act. To right the blatant racial wrong against Johnson, Republican Sen. John McCain and House Rep. Peter King last year pushed a resolution through the Senate and House of Representatives urging Obama to pardon Johnson.

The Justice Department quickly said no, saying that it does not traditionally pardon the deceased and that the president’s focus should be to pardon persons "who can truly benefit" from it. Obama can ignore the Justice Department and pardon Johnson but the odds he won’t. Presidential pardons for the dead are virtually unknown. Bill Clinton and George Bush are the only presidents who ever granted one. In 1999 Clinton pardoned Henry O. Flipper, the first black graduate of the U.S. Military Academy at West Point. Flipper was wrongly accused of embezzling commissary funds. In 2008 Bush pardoned Charlie Winters for illegally selling decommissioned bombers to Israel during the Arab-Israeli war in 1948. Winters was convicted and served 18 months in prison. He died in 1984. Obama has yet to grant a pardon or commute the sentence of anyone living. He’s been one the slowest presidents ever to grant clemency.

Though the racial controversy that ensnared Johnson is a century old, and Johnson’s been dead more than a half century, a pardon for him is still a racial and political minefield for Obama. McCain and King don’t face that risk. They are white, conservative, Republican, and do not occupy the White House. Even if Obama quietly pardoned Johnson, he would likely not be hailed for righting a historic wrong but for playing race with a deceased black man who in his day flaunted the law and the moral code of society. Race and politics simply can’t be separated even when the recipient of justice is a dead man.

Obama acknowledged the peril of race in December when the Congressional Black Caucus saber rattled him to take special action to help chronically jobless young blacks and financially strapped minority businesses. Obama made it clear that he couldn’t and wouldn't do anything special for blacks.

The president’s bluntness on race was no surprise. In his candidate declaration speech in Springfield, Illinois in February 2007, he made only the barest mention of race. Obama talked about change, but change for everyone. He had little choice. The institution of the presidency, and what it takes to get it, demands that racial typecasting be scrapped. Obama got a bitter taste of the misery that race can cause a president him when in an unscripted moment he spoke his mind and blasted a Cambridge cop for cuffing and manhandling Harvard University professor Henry Louis Gates. The loud squeals that he was a bigot, racist and anti police for siding with Gates bounced off the Oval Office walls. A chagrined Obama back pedaled fast and asked all for forgiveness.

Obama’s tight adherence to a race neutral script is not unique. Bill Clinton in the White House and Al Gore and John Kerry on the presidential campaign trail in 2000 and 2004 followed the same script to the letter. The script requires a Democratic presidential candidate to win elections, and if they win to formulate a moderate agenda on civil rights, poverty, failing inner city public schools, the HIV-AIDS crisis, and the racially skewed criminal justice system in written policy statements. And then say little, and do even less about them in the White House. If Gore or Kerry had won the White House, the likelihood is they would not have made these problems priority items in their White House.

Johnson tragically was a victim of American racial hysteria. His hounding and imprisonment was a grave historical wrong; a historical wrong that still screams to be righted. Unfortunately, it’s unlikely it will come with a White House pardon.

Earl Ofari Hutchinson is an author and political analyst. His new book is, How Obama Governed: The Year of Crisis and Challenge (Middle Passage Press).
Posted by The Hutchinson Political Report at 10:02 AM 1 comment: