Bury the Never Ending Myth of Jackson as Child Molester 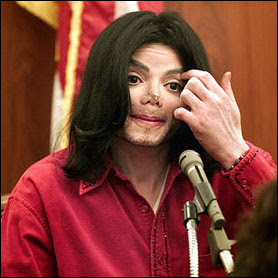 Earl Ofari Hutchinson
Websites, blogs and chatrooms pulsed with garish cracks about it. Legions of commentators and news reporters snuck it in every chance they got. More than a few of Michael Jackson’s fervent admirers and supporters made a dismissive reference to it. Even President Barack Obama in a cautious acknowledgement of Jackson’s towering contributions to American music and artistry still made reference to the “tragedy” in Jackson’s life which was a subtle nod to it. And New York Congressman Pete King skipped the niceties and flatly said it.
The “it” is the never ending myth of Jackson the child molester. It still hangs as a damning indictment that feeds the gossip mills and gives an arsenal of ammunition to Jackson detractors. This is not a small point. In the coming weeks, there will be a push to bestow official commemorative monuments, honors on and a national stamp for Jackson. The taint of scandal could doom these efforts to permanently memorialize Jackson.
The child molester myth doesn’t rest on Jackson’s trial and clean acquittal on multiple child abuse charges in a Santa Maria courthouse in June 2005. Only the most rabid Jackson loathers still finger point to that to taint Jackson. The myth of Jackson as child abuser rests squarely on the charge by a 13 year old boy a decade before the trial and the multi-million dollar settlement out of court. The settlement, then and now, feeds the suspicion that Jackson must have done something unsavory and probably criminal, or else why settle?

16 years later, though, the facts remain unchanged. The charge that Jackson molested the boy was brought by the boy’s father. In interviews the boy repeatedly denied the charges. This changed only after he was administered sodium amytal, an invasive, mind altering drug that medical experts have frowned on and courts have disregarded in witness testimony. Prosecutors, police departments and investigators in Los Angeles and Santa Barbara spent millions of dollars, convened two grand juries and probed nearly 200 witnesses that included 30 children, who knew Jackson to try to substantiate the charge. Not a single corroborating witness was found. Nonetheless, a motley group of disgruntled Jackson’s former housekeepers, attendants and bodyguards still peddled the story to any media outlet willing to shell out the cash that Jackson had engaged in child sexual wrongdoing. Not one of the charges was confirmed. Typical was this exchange between one of Jackson’s attorneys and one of the accusing bodyguards under oath:

“So you don’t know anything about Mr. Jackson and [the boy], do you?”
“All I know is from the sworn documents that other people have sworn to.”
“But other than what someone else may have said, you have no firsthand knowledge about Mr. Jackson and [the boy], do you?”
“That’s correct.”
“Have you spoken to a child who has ever told you that Mr. Jackson did anything improper with the child?”
“No.”
“Where did you get your impressions about Jackson’s behavior?”
“Just what I’ve been hearing in the media and what I’ve experienced with my own eyes.”
“Okay. That’s the point. You experienced nothing with your own eyes, did you?”
“That’s right, nothing.”

When asked at the time about the charges against Jackson, child behavior experts and psychiatrists nearly all agreed that he did not fit the profile of a pedophile. They agreed that the disorder is progressive and there are generally not one but a trail of victims.

The myth of Jackson as child molester never hinged on evidence or testimony to substantiate it, but solely on the settlement. Why then did Jackson agree to it?
No charge stirs more disgust, revulsion, and pricks more emotional hot buttons than the charge of child molestation. The accusation stamps the Scarlet letter of doubt, suspicion, shame and guilt on the accused. The accused can never fully expunge it. There is simply no defense against it. Under the hyper intense media glare and spotlight that Jackson remained under, the allegation no mater how bogus would have been endless fodder for the public gossip mill. This would have wreaked irreparable damage on Jackson’s ever shifting musical career and personal life.
A trial in Los Angeles in the racially charged backdrop of the Rodney King beating, the L.A. riots, and pulsating racial tensions in the mid-1990s would have been risky business. A trial in staid, upscale, and majority white, Santa Barbara County would have been even more risky.
Jackson and his attorneys knew that when it came to the charge of child molestation the presumption of innocence, or even actual innocence, is tossed out the window. Though Jackson did nothing wrong, a trial would have left him, his reputation and his career in shambles. The settlement was the only pragmatic, logical and legal way to end the sordid issue.
The settlement under extreme duress must not sully his name and place as an honored American icon. The myth of Jackson as child molester must finally be buried.

Earl Ofari Hutchinson is an author and political analyst. His weekly radio show, “The Hutchinson Report” can be heard on weekly in Los Angeles on KTYM Radio 1460 AM and nationally on blogtalkradio.com
Posted by The Hutchinson Political Report at 7:43 PM 12 comments: