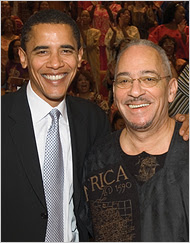 Whoever on Team Obama keeps feeding into Democratic presidential candidate Barack Obama’s seeming compulsive need to speak out on the Reverend Jeremiah Wright should get the swift boot. When Wright went on his latest public and media tear, Obama should have simply issued a statement saying this: Wright is no longer my pastor. And as I have said repeatedly, his views do not reflect mine, and then move on.

But no, Obama’s Wright compulsion drove him to deliver a defensive and apologetic so-called race speech in which Wright was the centerpiece. Next, he denounced Wright’s views in an interview. Now he holds a halting, stumbling, anguished voice press conference to denounce Wright again. Here’s the effect of all this. He’s given a slew of gossipy, media talking heads more salacious grist for the gossip and rumor mill about Wright, the church and Obama’s long term relationship with both.

He’s elevated Wright from a relatively obscure, local preacher to a nationally known polarizing figure. He’s deepened the suspicions of those who all along felt that he was a closet radical and race panderer. This hurt him with white voters in Ohio and Pennsylvania, and almost certainly it will hurt him in Indiana. It has pecked away at the razor thin lead he had over Clinton among Democrats, and dropped him behind McCain in the general election. (Hillary beats McCain by ten points).

He created clouds of doubt among some of his non-rabid, and non-true believer supporters that maybe it’s time to take a second look at him and his candidacy. He’s given political analysts and pundits boundless ammunition to fire the jibe that maybe he is unelectable. After all, if he bombs with blue collar, rural, and less educated white voters in Ohio, Pennsylvania who are Democrats, what chance does he have of getting a big swatch of the must win independents who fit that same vote demographic in the South, the Midwest and the West to back him in a head to head showdown with McCain? He’s gotten so bogged down with the obsessive need to slam Wright that he’s managed to self-derail his campaign from the issues that should matter to debating Wright on of all things as to whether Wright and the black church as Wright claims are one and the same.

Finally, and worst of all, no matter how much he protests that Wright doesn’t represent him or his thinking, the fact is he sat in his church for nearly two decades, called him a spiritual mentor and family confidant, appointed him to an advisory post in his campaign, and in his so-called race speech refused to disown his two decade experience and relationship with him. This instantly makes his Wright protest sound like the wail of a politician running scared, and who sees the long, arduous, time consuming and patient work he put into building up public trust in him as the nation’s great political hope fast washing down the drain.

But Obama is no different than other inexperienced politicians who get blind-sided by damaging and hurtful allegations and associations. They panic, do their public mea culpas, and hope and pray that it all blows over. It never does. The clouds of doubt remain transfixed in the air of the voter’s minds, and that doubt will always be there with whispers, wisecracks, and raised eyebrows that maybe the politician with a taint who so many put their fervent faith and hope in is not all that he’s cracked up to be.

The more optimistic Obama backers point to Bill Clinton as the best example of a much admired, effective political leader who rebounded from a scandal and attacks and whose popularity ratings soared to the stars. That’s true but there are some big differences. Clinton was a battle tested, second term president, the economy was booming, there were no major foreign policy crises, and millions of supporters including many Republicans saw the GOP assaults on him as nothing more than vindictive partisan politics. That was more than enough for him to ride out the tide.

Obama is hardly Clinton. And the issue that dogged Clinton was sex. The issue that dogs Obama is race. That in any season is perennially for a politician, especially a black politician, their worst nightmare. That’s even truer for Obama who has worked tirelessly to sell white voters on his non-racial message of unity, harmony, and hope.

Obama then must understand two things. Wright isn’t going away. His ego and a press insatiable for any inflammatory Wright quip will insure that. If that’s so then Obama should button it up on Wright. Anything else he says on him will further insure that Obama not Wright is Obama’s worst enemy.

Earl Ofari Hutchinson is an author and political analyst. His new book is The Ethnic Presidency: How Race Decides the Race to the White House (Middle Passage Press, February 2008).
Posted by The Hutchinson Political Report at 9:24 AM 5 comments: