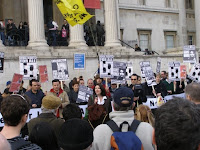 The influence of mainstream media has often made it difficult for Western women to draw parallels between sexist oppression of women in the West and that of Middle Eastern women. Programmed to see Middle Eastern women as the “other,” shackled by backward, terroristic Islamist regimes, many uncritically accept the mainstream media’s portrayal of the “secularist” enlightened West as the liberator of Middle Eastern women. As an activist in the Iranian women’s movement, Sussan Gol has been outspoken in making connections between her struggle and the global implications of women’s oppression. Gol recently traveled to the U.S. to participate in the commemoration of International Women’s Day on March 8th. She went to high school in L.A. and moved back to Iran after the fall of the U.S.-backed Shah government in
1979. The rise of the Ayatollah Khomeini led to the repeal of virtually all of the civil rights women had begun to enjoy prior to the Revolution. Compulsory implementation of the hijab (a practice which entails modest traditional dress, such as the veil) and the draconian restrictions of Sharia (Muslim law) have severely limited women’s basic mobility, access to education, rights within the family and in the political sphere. During the Shah’s rule, separation of church and state was observed and overt control of women through the hijab was relatively minimal. With the institutionalization of a theocratic Islamic fundamentalist state, women were routinely forced into arranged marriage and treated as the property of their husbands and male relatives. Policed in every aspect of public and private life, women have no right to their own children and are even forced to sleep with their husbands four times a day.

Because of their activism, Gol and her husband were jailed and placed in solitary confinement by the Khomeini regime. In the mid 1980s her husband was executed by the government. She has continued to agitate for women’s rights in an atmosphere that she describes as “suffocating,” holding that Islamist feminists are making a bargain with the devil. For Gol, the relationship between gender equality and fundamentalist Islam is unequivocal. While some Iranian women’s rights activists are interested in reforming Sharia law, Gol believes that any version of Sharia critically undermines human rights by policing women’s bodies, constructing them as property and denying them the fundamental right to control their own lives and destinies. She sees parallels between the struggles of Iranian women and those in the West. Historically there has been a paternalistic divide between women’s rights activists in the West and Islam. Some Western feminists view Islamic fundamentalist oppression of women as the antithesis of Western ideals and values. However, Gol stresses that there are similarities between Muslim women’s experiences and that of non-Muslim Western women. Despite the claim of Western cultural superiority, Christian fundamentalist incursions into reproductive rights, epidemic domestic violence, the near enculturation of sexual assault in American society, inequitable access to child care and gender-based pay inequities continue to imperil women’s right to self-determination.

Thus, although the U.S. and Europe are often regarded as the models for women’s political agency, Middle Eastern feminists like Gol emphasize their solidarity with the struggles of disenfranchised women in the West, particularly that of women of color. Sex trafficking and prostitution as a form of capitalist commodification of women’s bodies is a common thread. Due to the Iraq War, sex trafficking of Iranian women has exploded. In some instances poor women are “exported” to countries like Dubai and sold into kingdoms as sex slaves and prostitutes. Because of the gender wage hierarchies imposed by the West, the inability of unskilled female laborers to find living wage employment to support their families has made sexual slavery a desperate final option for some women. For example, in the absence of job opportunities, young African American women may turn to the sex trade or be “pimped” into prostitution by predatory male hustlers. Gol also points to the pervasiveness of international sex trafficking in the U.S. and Eastern Europe as examples of how women’s bodies and sex work have continued to be valuable commodities in the global marketplace.

These regimes of patriarchal exploitation and control have been exacerbated by U.S. imperialism in the Middle East. Driven by the U.S.’ strategic interest in controlling Iran’s oil reserves, Iran has historically been caught in the crosshairs. According to Women for Peace and Justice in Iran, U.S. intervention in Iran “postponed the advancement of rights in Iran for decades,” undermining “secular and left opposition to the rule of the Shah and bolstering the superiority of the Islamic forces when the revolution was eventually won.” Over the past several years, the mainstream media’s portrayal of the U.S.’ invasion of Iraq as a democratic mission has been exposed by human rights and anti-war activists as nothing more than imperialist propaganda.

Nonetheless, the Obama administration has renewed its predecessor’s commitment to this agenda. Consequently, Gol condemns the U.S.’ deployment of 70,000 more troops in Afghanistan. She views U.S. occupation as destructive to progressive social justice change in the region. As many Middle Eastern activists have noted, U.S. occupation has been a major catalyst for the rise of Islamic fundamentalism. However, Gol cautioned, “Islamic fundamentalism hangs on its ‘death to America’” rhetoric as a means of legitimizing and reinforcing nationalism. In some regards, poor people in the region see no other viable alternative to Western imperialism besides Islamic fundamentalism. Tragically, some Iranian feminists and intellectuals also buy into this line. And it is for this reason that Gol faults the activists of the Iranian Green Movement for their failure to challenge its leaders on the issue of nationalism and women’s rights.

Global women’s liberation is undermined by cultural binaries that weave a narrative of Western enlightenment versus Middle Eastern fundamentalism. In their pursuit of human rights for women in Iran, Gol and her feminist allies provide important global context for shared struggle and justice.

Sikivu Hutchinson is the editor of blackfemlens.org and a contributor to KPFK’s Some of Us Are Brave and WBAI NY’s Women's Collective.
Posted by Sikivu at 8:31 AM 4 comments: