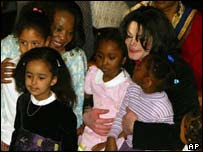 Leaders Will Announce the Organizations That Jackson Urged Donations For

A broad coalition of youth and civil rights leaders will publicly call on Jackson Memorial Ticket winners to donate to the list of needy organizations and social causes that Michael Jackson supported during his career. Jackson had an all consuming passion to aid and support programs and organizations that furthered human betterment. Toward that end Jackson gave tens of millions of dollars to social and children’s causes and charities.

“Jackson Memorial ticket holders can show their appreciation of Jackson’s monumental humanitarian work,” says Hutchinson, “By donating to the specific causes that Jackson held near and dear. This will be the best and most fitting way to celebrate and pay homage to the humanitarian spirit of giving and help that Jackson dedicated his life too.”

· Childhelp U.S.A. – Aims at meeting the needs of abused an neglected children—including education.

· UNESCO—The proceeds of one of his tours went to the education of children in developing countries.