Where Was the World When Haiti Really Needed It? 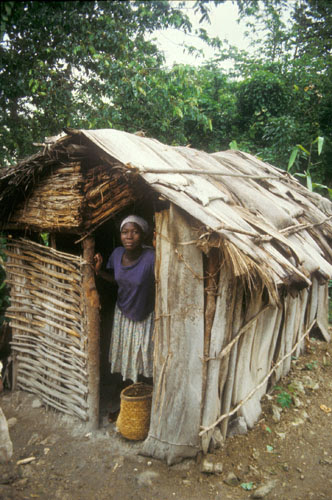 The heartbreaking and pathetic scene I and a group of other American visitors witnessed at the small beach town in Northern Haiti still haunt me. We had no sooner arrived at the beach when a contingent of Haitian police and local officials frantically waved away a throng of the town’s residents who had poured onto to the beach to hawk food, trinkets, and carvings, and tattered clothing items, but mostly to beg. Their torn tee shirts and ragged shorts, and emaciated, hollow eyed looks bespoke of more than Haiti’s legendary, world leading poverty. It spoke of the sheer, utter desperation to get anything from those they regarded as rich foreign tourists.

The tormenting scene that I and thousands of other visitors to Haiti have routinely witnessed routinely during the past decade has become the national emblem of Haiti. Yet, it took a murderous earthquake, clips of bodies sprawled in the streets, a collapsed palace and shanties, torn streets, and the shocked expressions on children’s faces for the US and legions of public agencies and private donors to leap over themselves to promise to send an armada of food, medical supplies, clothing, building materials, construction teams, security forces and cash to Haiti.
Why did it take a natural tragedy for this? Haiti’s sorry history of American occupation, brutal dictatorial and military rule, the flood of refugees trying to escape the nation’s destitution, the perennial food crisis’s, the wave of devastating hurricanes that tore through the country in one month in 2008, the US, Canada and France’s meddling in the nation’s internal politics , and the grinding poverty is well known.

Haiti’s corrupt, repressive military rulers and government officials get standard blame for the country’s chronic poverty and bankruptcy. There’s much truth to that. But Haiti is also a relentless victim of crushing and never ending debt servitude to the IMF and foreign banks, vicious labor exploitation, and the blind eye US aid policies that stunt Haiti’s farm and manufacturing growth.

The nation’s debt burden would sink virtually any developing nation. Haiti is compelled to shell out nearly $1 million a week to pay off its debt to the World Bank and the IMF; debt incurred by the Papa and Baby Doc Duvalier regimes and their successor military governments in the early 1990s propped up by the US. Half of the loans were given to the Duvaliers and the other dictatorships. They squandered the cash on presidential luxuries with barely a cent going to development programs for the poor.

In 2008, World Bank President Robert Zoellick in reaction to massive outcry from government officials and Haitian activist groups publicly pledged to forgive part of the nation’s the debt totaling a half billion dollars. The Bank reneged on the promise. The money could have bankrolled a vast expansion of healthcare, nutrition and feeding programs, supplies of clean water, and rebuilding the country’s badly frayed infrastructure.

The United Nations has hardly been a benevolent force to aid the country’s development and Democratic rule. The UN yearly shells out $600 million to maintain its 8000 peace keepers.

Yet when the hurricanes ravaged the country the UN force did not dispatch amphibious units, build temporary bridges, or provide trucks or equipment to provide emergency help to Haitians in distress.

US AID has come under intense fire for turning a blind eye to corporations and contractors who ignore basic Haitian labor, human rights, minimum wage and environmental laws, shun service providers, and invest only a relative pittance of profit back into Haitian small businesses, manufacturing, and food production. This is a particular sore point given Haiti’s near total reliance on foreign food imports has resulted in famine, near starvation, and food riots.
The United Nations Food and Agriculture Organization report that with proper investment in food production the country is more than capable of feeding its 8.5 million population.

In 2008, a coalition of US and Haitian human rights groups flatly accused the US of aiding and abetting corruption in the country. It demanded that then President Bush and Congress determine which US corporations and Haitian officials pocketed and benefited from the more than $4 billion USAID and their sub-contractors spent from 1994 to 1998. They demanded to know who profited and enriched themselves from the over $8 billion dollars spent following the US engineered overthrown of democratically elected President Jean Aristide. The groups charged that the systematic looting of the country’s treasury did not end with his ouster. Their demands fell on deaf ears.
A colossal earthquake brought the world to Haiti’s doorstep. The questions though are why did it take that? And what will it take for the world to stick around after the rubble is cleared and help transform Haiti into the democratic, self-supporting nation it can be?

Earl Ofari Hutchinson is an author and political analyst. His forthcoming book, How Obama Governed: The Year of Crisis and Challenge (Middle Passage Press) will be released in January 2010.
Posted by The Hutchinson Political Report at 9:28 AM 2 comments: