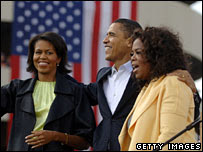 A question that’s been whispered, grumbled about, and on occasion even angrily shouted out on blogs and chat sites is why is it that the whites who back Hillary Clinton are lambasted as racist, yet the black voters that back Obama in near record numbers aren’t? The question has angrily rolled off more than a few lips in the wake of the steadily firming up racial brick wall that Obama crashed against with legions of white voters in Ohio, Pennsylvania, West Virginia and Kentucky. The charge of a racial double standard started with a few random comments from some white voters who said they wouldn’t vote for Obama because they were turned off by the sight of so many blacks deliriously backing him. This convinced them that blacks backed him solely because he’s black and their only interest was to get one of their own in the White House.
A number of whites in Kentucky and West Virginia almost certainly voted for Clinton not because they believed she’ll be the most able commander -in-chief but simply because the only other choice was Obama. In exit interviews, some flatly said so. Clinton indirectly fed that visceral racism with her disastrous, an ill framed quip that hard working, white Americans back her and not Obama.
There’s little doubt that a top heavy black vote powered Obama’s crushing wins over Clinton in the South, and helped keep him competitive in Ohio and Indiana, the states that he lost. It’s also true that blacks have a special enthusiasm for his campaign that’s fueled by a mix of pride, admiration, accomplishment, and the sense that he can win and make history. He’s also the presidential candidate who they desperately long for to wipe away the horrid taste of the Bush years. But the enthusiasm is also fueled by him being black. In exit polls in North Carolina nearly a quarter of black voters admitted that race was the big factor in motivating them to vote for Obama. This is the sore point for some whites.


But Obama’s color and the pride blacks take in his historic first tell only part of the story of why so many blacks cheer him. Obama is a Democrat, and so are the overwhelming majority of black voters. They have given every Democratic presidential candidate and incumbent since Lyndon Johnson in 1964 a consistent, and at times off the chart, percentage of their votes. They gave Democratic presidential candidates Al Gore and John Kerry nearly ninety percent of their vote, and they were white Democrats. If Obama hadn’t come along, many would have been just as exuberant about Hillary Clinton, and they would have given her as big if not a bigger percent of their vote than Gore or Kerry got. In fact, given the love fest many blacks had with Bill Clinton, at least before Bill’s perceived early campaign racial mud sling at Obama, Clinton still might have gotten a respectable percentage of black votes.
There has never been a reverse Bradley Effect among black voters. That’s
the penchant for some whites to lie to pollsters and interviewers and say that a candidate’s color doesn’t matter only competence and ability. Then in the privacy of the voting booth they vote for a white candidate over a black one. Black voters in contrast have voted party allegiance, and now that they have a candidate who represents their party who happens to be black it’s an easy call to make to support him.
While race, though, is a compelling issue for some blacks, it’s also problematic for Obama, especially if there’s the perception among large numbers of fence sitting independents, and Reagan Democrats that an Obama White House will have a racial tilt.

The hard reality is that black votes alone don’t put candidates in the White House. The votes of white males, especially blue collar white males, do.
Even before the controversy over Jeremiah Wright broke and Obama’s disastrous crack about blue collar whites and their penchant for guns and religion soured many of them toward him, he hadn’t made much headway in bumping up his numbers among them. They make up nearly forty percent of the American electorate. In every election dating back to Reagan’s big wins over the Democrats in the 1980s and since they have been the sure ticket of GOP presidents to the White House. In exit polls, one quarter of Clinton backers said that if Obama is the nominee they’ll vote for McCain or turn into Election Day no-shows.
Here’s the Catch 22. Obama could not have come as far and as fast as he did without the votes and cheers of African-American voters. But for some whites that translates out to reverse racism. It isn’t, but the perception that it is is a two edged sword that will continue to cut at Obama.

Earl Ofari Hutchinson is an author and political analyst. His new book is The Ethnic Presidency: How Race Decides the Race to the White House (Middle Passage Press, February 2008).
Posted by The Hutchinson Political Report at 6:57 PM 1 comment: