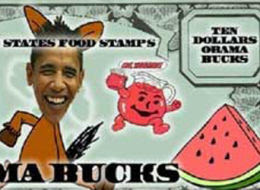 
Not long after Democratic presidential contender Barack Obama tossed his hat in the presidential rink back in February 2007, an odd, even bizarre thing happened. A hodgepodge of avowedly racist groups burned up internet sites not with rage, but glee. They were giddy at the thought that Obama might win.

Their rationale was that an African-American in the White House would prove their point that blacks were out to dominate whites and that whites would be so disgusted that they would unite in righteous and very racist anger. That in turn would trigger their long swooned over racist fantasy of a race war. This was dismissed for what it was, namely the ranting of the racist lunatic fringe. But that doesn’t mean that many whites who harbor hidden or even conscious racial animus won’t also back Obama albeit for their own reasons. A mid-September survey found about one quarter of whites hold negative views of blacks that are top heavy with the old shop worn stereotypes. The respondents said that blacks use race as a crutch, are not as industrious as whites, oppose interracial marriage, and are terrified of black crime (Obama mildly chided his white grandmother in his so-called race speech back in March for saying she feared black men). Yet nearly a quarter of them claim they’ll vote for Obama.

The standard explanation for this seeming racial schizoid view is that whites are so hammered by financial hardship that the economy trumps race and that Obama can do more to help them out of their financial hole than Republican rival John McCain. Others like him because his race neutral campaign is a soothing departure from the perceived race baiting antics of Jesse Jackson and Al Sharpton. Still others like him because his racially exotic background supposedly doesn’t fit that of the typical African American.

There is truth in these reasons cited to explain Obama’s appeal to some racial bigots. But there’s another reason that hasn’t been cited. That’s the long, checkered, and tortured history of racial exceptionalism. That’s the penchant for some whites to make artificial distinctions between supposedly good and bad blacks. That’s apparent in the unthinking offensive, insulting, and just plain dumb crack made to some articulate, well-educated blacks in business and the professions that they are “different than other blacks or not like other blacks.”

Racial exceptionalism also stems from the ingrained, but terribly misplaced, belief that blacks are perennially disgruntled, hostile, and rebellious, and are always on the lookout for any real or perceived racial slight, and etch to pick a fight over it.

An African-American who doesn’t fit that type is touted, praised, even anointed by some as the reasoned voice of black America. A century ago the mantle of the reasoned, exceptional African-American was bestowed on famed educator, Booker T. Washington. He was showered with foundation and corporate largesse. In the 1920s and 30s, NAACP leaders always found a ready welcome at the White House. They were praised in the press and bankrolled by some industrialists. In the 1960s Urban League President Whitney Young, NAACP executive secretary Roy Wilkins, and Martin Luther King Jr. before he fell out of favor with the Lyndon Johnson White House after his too vocal opposition to the Vietnam War and turn to economic radicalism, were lionized for their reason and racial moderation.

In the 1980s, Presidents Reagan and Bush Sr. actively cultivated and promoted a bevy of younger GOP friendly academics, black business leaders, and black conservatives. Reagan and Bush Sr. plainly saw them as a leadership alternative to the black Democrats and the old guard civil rights leaders. The black conservatives were appointed to government posts, bagged foundation grants, were feted by conservative think tanks, and their columns were routinely published in major newspapers. They were continually cited by writers and reporters as a breath of fresh air among African-Americans mostly for their willingness to break ranks with and to blister Jackson, Sharpton, and the civil rights establishment.

Obama hardly fits the mold of a black conservative, but neither is he the ultra-liberal Democrat that some conservative opponents routinely paint him as. Even before his rocket launch to the threshold of the presidency, he was considered a moderate, centrist Democrat, a consummate party insider, and a rising Beltway establishment politician. Without that stamp of mainstream approval, his White House bid would have never got to political first base.

Obama bristles publicly at the notion that he’s in competition with or a critic of civil rights leaders, or that he is immune from racial jabs. He has repeatedly praised past civil rights leaders for their heroic battle against racial injustice. That’s good, but that doesn’t erase the nagging penchant to elevate some blacks above the racial fray, and declare them the exception. That includes some white bigots who say they’ll back Obama.

Earl Ofari Hutchinson is an author and political analyst. His new book is The Ethnic Presidency: How Race Decides the Race to the White House (Middle Passage Press, February 2008).

Posted by The Hutchinson Political Report at 12:55 PM 6 comments: