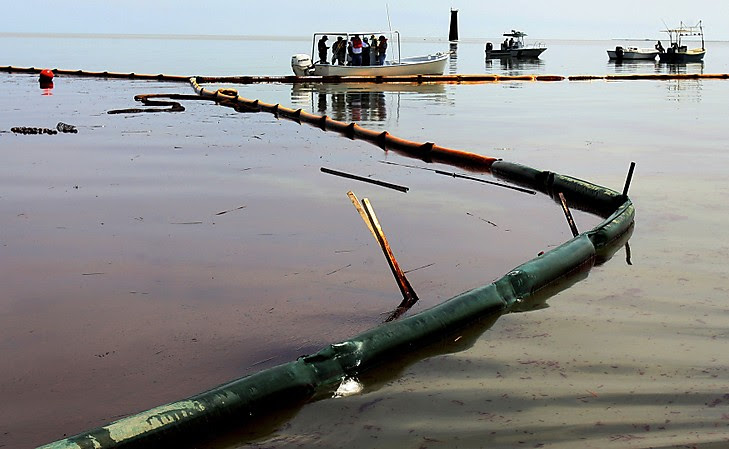 The instant the BP ooze hit the Gulf’s surface the sniff of political blood was steady and strong. Virtually every reputable scientist, engineer, and technician made the point that given the complexity of the spill, the technical challenges, and constraints on the regulatory power of government’s agencies, the Obama administration has done everything it could to staunch the spill. But the cry still is: Blame Obama for it.

The GOP got its first return on the hit attack on Obama for the spill with a USA/Gallup poll. A majority of Americans say that Obama did not do and say enough about the spill. An even bigger number finger point the government for inaction. This isn’t much of a consolation. Thanks to the drumbeat attack from the GOP, the Ron and Rand Pauls, tea party activists, shrill rightside bloggers, talk jocks and columnists, in much of the public’s mind the government and Obama are one and the same villains. The drumbeat attack on Obama for the spill has been so effective that some top Democrats who should know better buy into it. Pennsylvania Governor Ed Rendell loudly proclaimed that if Bill Clinton were president he would have been in Gulf water in a wetsuit. Rendell didn’t explain how Clinton in a wetsuit could cap a runaway well 5000 feet down. But that’s the kind of mindless idiocy that the bash Obama for BP has dredged up.

The worst part is that a big chunk of the press has beaten the blame Obama for the spill drum. The issue is not what Obama or the government could or couldn’t do, but how to wound Obama. The GOP angles for three big political payoffs in the political blood lust. Stick just enough of the oil tar on Obama to grab a few more seats in the house and senate in November. With many political contests rated horse races, a natural disaster can be massaged, exploited, and twisted to squeeze the maximum political benefit out of it, at least that’s the hope.

Obama’s energy plan, cap and trade, and climate control is also the target. Cripple them, or kill them, and then the GOP can wave the victory flag and claim that it rescued alleged flawed, business and energy industry unfriendly plans from being hoisted on Americans. A cynical dividend from this is that Obama embraced ramped up offshore drilling before the BP spill. The GOP’s mantra was drill, baby, drill. It relentlessly carried oil industry’s bucket for it and waged a two decade war against environmentalists to open up Alaska, and the coastal waterways, for drilling. Another cynical dividend is that the GOP gets to knock Obama for supposed lax regulation and oversight of the oil industry, the very things that it always regards as a plague on big business.

The GOP will paint Obama as weak, ineffectual, and clueless in the face of a major crisis. During campaign 2008, Republican presidential foe John McCain and mate Sarah Palin pounded him as an untested, greenhorn novice on terrorism and foreign policy. When the first major crisis hit, supposedly he’d come unglued. The crisis McCain and company had in mind was a major terrorist strike on US soil. That hasn’t happened. But BP did, and it’s as good a substitute as any for the GOP to ream Obama as inexperienced and frozen in place when it comes to taking decisive action to confront a crisis. It wasted no time in trying to plant the vision in the public mind of a comatose Obama reacting the way Bush did to Katrina. The vision hasn’t stuck mostly because the comparison is bogus, and the public hasn’t bought it.

The BP spill, though, does pose a grave political danger to Obama. The longer it takes to fully cap the well, the door stays wide open for the GOP to rivet public attention on the damage, spin it as the greatest environmental disaster in American history, and stoke public anger at Obama and the government’s supposed ineptitude. The Bush administration was hopelessly crippled after its gigantic Katrina bauble. The GOP banks the same thing will happen again and that voters will misconnect the political dots and punish incumbents in November for the perceived weakness or incompetence of the administration in power in dealing with a horrific disaster. In this case, the administration is Obama’s and the incumbents targeted are Democrats. More than a few Democrats have taken the cue, and remained stone silent on the crisis.

Obama has acted diligently, responsibly and professionally in dealing with an unexpected crisis that would have caught any administration off guard. A significant number of Americans understand this and even those critical of Obama for his handling of the spill still tag BP as the real bad guy. Still, no matter how well managed, disasters carry political risks, the BP spill is no different. The GOP will do everything it can to tag it as Obama’s disaster.