Palin’s “Mama Grizzlies” Are Devouring the GOP Not Obama 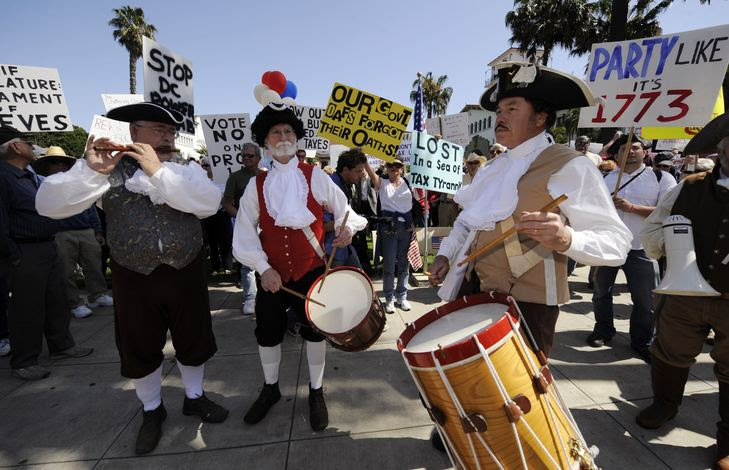 Sarah Palin recently told an anti-abortion activist group that “mama grizzlies” will eat up the Democrats in November and shove the country back into the GOP’s arms. Her home grown, home state animal kingdom analogy would have been more apt and frightening a year ago when the Tea Party first gathered steam. Then GOP leaders banked that the Tea Party would be their back channel hammer to pound Obama and the Democrats in November. Things went well in the beginning. The party’s angry protests, marches, and parades, the passion, zealotry, their sloganeering, name calling, their anti-tax, anti big government, and defense of freedoms code word racism boded well. President Obama seemed the perfect made-in-heaven foil. He's a moderate, African-American, Democrat who they recast as a closet unpatriotic, race baiting, socialist.

The set script, though, has suddenly radically changed. In quick succession, GOP stalwarts in Utah, Florida, Kentucky, and Maine, and John McCain in Arizona have either been knocked out the box or are under withering fire from Tea Party activists. The white hot anti-incumbent rhetoric in Tea Party circles is almost totally aimed at the GOP incumbents and candidates. Any hint from a GOP incumbent in their words, actions, or voting record of making nice with Democrats and Obama guarantees a tongue lash from Palin, and relentless hectoring, harassment, and even physical threats from street level activists. GOP leaders have slowly woke to the recognition that Tea Party activists will settle for nothing less than a full blown exorcism of any trace of moderation or compromise from the GOP.

The danger looms for the GOP that 2010 could be 1964 all over again. That was the year that a right insurgency powered by ferocious Deep South and Western opposition to the civil rights movement, legislative and court ordered desegregation, and pending civil rights rights bills rammed the GOP to the hard right and in that year’s presidential election, to political disaster. The GOP suffered mightily in the aftermath of LBJ and the Democrat’s landslide sweep. But the crushing defeat did not totally transform the GOP into a hard core rightwing opposition party. There were many conservative Republicans who were still willing to compromise, conciliate, and work when necessary with Democrats.

The best case in point is McCain. Pre-presidential candidate Obama’s ascension, he was widely held up as the standard model of the responsible, pragmatic, Republican conservative who was willing to reach across the congressional aisle to get things done. It’s a far different story in the Obama White House days. McCain’s sprouted wings on his heels in his mad dash to the right to keep his Senatorial job. His rush to the right typifies the GOP’s Catch 22 dilemma. He can’t win, or at least the perception is that he can’t win, by ticking off Tea Party activists. Yet, catering to them types him as a pandering, captive of the loose jointed right, shill.

Either case scenario poses the grave threat that the GOP could be a fractured, unhinged party months before the November showdown. Polls and surveys show this potentially chilling scenario. In a Pew survey 40 percent of Democrats say they have no faith in their elected representatives in Congress. That’s an all time low in the history of the Pew survey. But even fewer Republicans say that they have any faith in their congressional representatives. That’s a crushing load the GOP could drag into the fall elections. A pack of hard right candidates that carry the GOP banner will be a powerful turn-off to thousands of politically crucial independent voters. In past polls, many of them registered disgust, frustration and anger at Obama and the Democrat’s policies and signaled a willingness to shift back to the GOP. This could be out the window.

Then there’s Palin. She poses absolutely no threat to Obama’s solid or lukewarm Democratic base. The mere mention of her as a possible presidential candidate is more than enough to terrorize disappointed liberal Democrats out of their Obama inertia. The real damage that she can do will be to further confuse, rile up, and split Republicans. Polls show that while voters in general say Palin's not presidential timber, a huge minority of Republicans say that she is. This could translate into a stock of disgruntled, frustrated voters who would be sorely tempted to push, prod and hector the GOP to give Palin her due as a possible presidential candidate. This kind of talk will propel even more independents away from the GOP.
Palin can talk all day about “mama grizzlies” ousting Democrats from power in November and beyond. But the stark political reality is that so far the only ones who have been threatened or devoured wear the GOP tag. This wasn’t in the GOP mainstream’s script for Palin and the Tea Party.

Who are the "Mama Grizzly Followers"?
The Washington Post describes them for us.

On WP list for California is none other than:
Carly Fiorina

Palin does the job for the Democrats, they can sit back and enjoy the
circus.

The GOP women are appear so "out of touch" that when they speak they don't understand that they are not talking behind closed doors to their GOP handlers but to the voting public.

Take the case of this "Mama Grizzler"
Meg Whitman
she insists she can," if elected, start saving California money by eliminating 40,000 state government jobs".

What's the difference between the GOP women and the Democratic kind (who don't care much either about jobs for Americans ) is that the latter keeps their mouths shut or have you noticed?
Los Angeles Unemployment Rate

Now for the blues...

Meg Witman has not yet been ordained as a Grizzly,
but she probably qualifies.

By the way, Lou Dobbs will join up with the Tea Party folks as a speaker.
Hum... will there be a "conflict of interest" with Lou and Sarah supporting the new immigration law in Arizona and "Grizzley Susana Martinez" - the Dona Ana County district attorney seeking the GOP nod in the New Mexico governor's race?

[Dobbs was fired from CNN after a decade of racist anti-Mexican rantings.]

This is beginning to look more like the "Mad Haters Party".

Correction: "The Mad Hatter's Party".
Since we fell down this hole my keyboard no longer does backspaces.

At this point, down the rabbit hole ,
"Sarah PALIN is the best hope for REPUBLICANS and the "Mad Hatters Tea Party".

Since, someone just cried out:

Now, if the Democrats can just be quiet at least until Lou fires up.
The path out of this hole will unfold itself.

Anyway this story is much more fun than the "Three Bears".