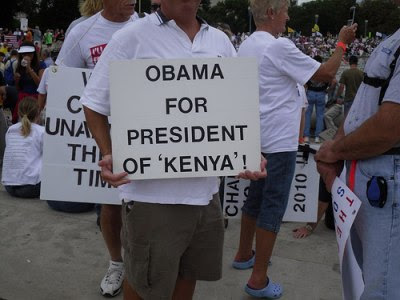 The news hit last December that there was a racially inflammatory picture of the lynching of a black man next to a smiling cherubic picture of three young happy go lucky whites captioned “Happy N….Day” on senate campaign spokesperson Chris Hightower’s myspace website. Rand Paul issued this statement. “I have never heard a single utterance of racism from this staffer nor do I believe him to have any racist tendencies. However, it is impossible to present the ideas and reforms we need in this country with this controversy present. Therefore I have accepted his resignation."

What’s wrong with this? Where to begin? The racially vile picture was posted on the site on January 2008. It’s irrelevant whether Hightower posted it or not (and he didn’t say) or by a nut case prankster. It stayed there for nearly two years was viewed and commented on by countless site visitors and many others. It was removed only after a mild furor about it. The furor became a furor only after Paul emerged as a serious contender for the GOP senate nomination in Kentucky. So the ancient question again is what did Paul (or Hightower) know about the posting and when did he know about it? And if he didn’t know anything about it which we still don’t know for a fact, why didn’t he know about it? Hightower was not some low level campaign grunt. He was Paul’s main spokesperson.

Now there’s Rand’s statement on Hightower’s resignation. Note carefully that he remorsefully and regretfully accepted it with the obligatory denunciation of racism. But Paul did not fire him. He did not even reprimand him. He did not promise a sweeping, thorough investigation of how this kind of blatant racist taunt could filter into anything that remotely touched on his campaign. Nor did he publicly threaten to ban in Boston anyone who remotely allowed the use of a site connected with his campaign to post or spew racially vile material. A few libertarian sites took Paul to task for his muted response to Hightower and questioned whether Paul took the issue seriously enough. They chided him for not taking a more aggressive stance against it. It was indeed a teaching moment that Paul could have used to make it clear racism has no place in his campaign, and anyone that goes there with that will get the swift boot.

Democrats, civil rights leaders, and a wave of commentators have gotten hoarse screaming at the tea party leaders to speak out against the party’s unabashed bigots and the displays of racial hate. The pleas have fallen on deaf ears the tea party top. The simple reason is that it would cut its throat if it denounced its racists and racism, and really meant it. The shouts, taunts, spitting, catcalls, joker posters, N word slurs, Confederate and Texas Lone Star flag waving by tea party activists is and has been an indispensable political necessity for the movement.
Just as Chris Hightower about that. Paul for sure didn’t.